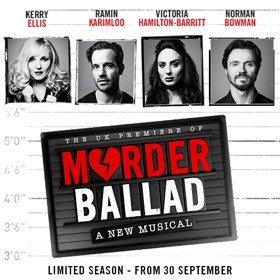 Featuring an all-star cast, Murder Ballad is a thrilling new musical playing at The Arts Theatre, fresh from its Off-Broadway debut. With an entirely original score, award-winning writer Julia Jordan and singer-songwriter Juliana Nash have brought us a modern tale of love, passion and betrayal.

Although focusing on a rather predictable love-triangle with a not-so-happy ending, and a plot that is somewhat handed to you in the title, it is difficult not to get caught up in the raw energy and fast-paced composition.

The sung-through production tells the story of Sara, Tom and Michael – three New Yorkers stuck in a web of love, treachery and broken dreams. Showcasing A-list musical theatre stars Kerry Ellis (Wicked, Cats), Ramin Karimloo (Phantom of the Opera, Les Misérables), Norman Bowman (Finding Neverland) and Victoria Hamilton-Barritt (In The Heights), the cast are an absolute vocal delight. Their voices are perfectly suited to the powerful nature of the numbers and with a live band as an added bonus, musically, this show has nailed it.

In terms of the visual staging, Richard Kent has done a wonderful job of keeping things simple. With very few large props the cast are able to swiftly move between scenes, supported by a backdrop of nicely designed video projections, even if they are a little too literal at times. It also becomes slightly manic when you’re watching Kerry Ellis dress and undress using the same outfit a number of times in one short scene, but given that the pace didn’t drop it’s not much of a criticism. If anything, it adds to the sexual nature of director Sam Yate’s creation.

If you are easily offended then the scenes of sexual simulation, a half-naked Karimloo and varying degrees of strong language may not be for you. Otherwise, you’ll enjoy it for the fiery rollercoaster that it is and you should catch it before the limited run is over!

Starring West End and Broadway legends Kerry Ellis (Wicked, Cats) and Ramin Karimloo (The Phantom of the Opera, Les Misérables), Murder Ballad is the tale of Sara, Tom and Michael, three New Yorkers caught in a secret love triangle that could tear their lives apart.

Don’t miss this incredible opportunity to see the biggest stars of musical theatre up close in a wonderfully intimate venue in the heart of the West End. This is a boldly brilliant new musical with a razor-sharp tale of modern relationships in the big city.