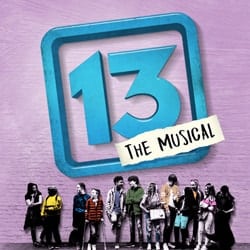 It’s such a good thing that the British Theatre Academy is giving so many young performers the chance to shine on a West End stage. They’ve done it before and I’m quietly confident they’ll do so again. For this production of Jason Robert Brown’s 13 The Musical, 19 characters are played by a total of 47 performers throughout the run. Beyond that, as the cast photos are not accompanied by their names in the show’s programme, it is quite impossible to say for definite who was played by whom. No matter: though Evan Goldman is both lead character and narrator, this is a true ensemble piece of musical theatre.

Occasionally, for this opening night performance at least, the American accents were oh-so-slightly questionable – mind you, I’ve heard worse from adult performers. Though none of the characters in the story are, according to the programme, “older than the show’s title”, let’s just say I would be surprised if this extended to the ages of all of the performers themselves. But this isn’t Lord of the Flies. It’s just that the older characters, apart from a few minor cameo roles filled by members of the company, are off-stage.

As ever with Jason Robert Brown musicals, the musical numbers are wordy, and taken together, there are few truly memorable verses. Perhaps only the final two songs, ‘Homework’ and ‘Brand New You’, have melodies that stick in the mind. The sound balance between the performers and the band, the latter directed by Chris Ma, is excellent, allowing the rapid dialogue and the narrative-driven songs to be understood as they were meant to be.

The style of humour has, to be blunt, zero subtlety. One school pupil, Archie, tells Evan that, “No one makes fun of me on the special needs bus. That would be ironic.” Elsewhere, the suggestive ‘Hey Kendra’ is so flirtatious that I wonder, if it were to be hypothetically broadcast, which side of the ‘watershed’ it would be deemed suitable for.

Whenever the laughs came, the punchlines were responded to heartily, a wholly justified acknowledgement of the flawless comic timing. None of this, quite extraordinarily really, results in hammy performances, for which director and choreographer Ewan Jones must take at least some credit for. Not being subjected to the hair-dryer treatment in a West End musical production was refreshing.

The storyline is not the most profound of plots. 13 The Musical could hardly be renamed Dear Evan Goldman. Everything is going so swimmingly for Evan in the first half that it is no surprise that things change for the worse in the second. Nonetheless, the portrayal of youngsters’ feelings and emotions are captured so plausibly, and as performed here, it’s highly convincing.

In all of the playground politics that goes on, much can be applied to adult life, where powers of perception are required in similar measure to understand not only what was said but what wasn’t said, and more particularly, what was meant by what was and wasn’t said. The plotting and scheming is no different to the world of politics or working in an industry where competition is strong and keeping everyone on their toes.

It boils down to this: I was engrossed by every minute of this coming of age story – even the cheerleading in ‘Opportunity’. And it is always good to see a cast clearly enjoying themselves on stage. An exuberant and joyous production, this is another triumph for the British Theatre Academy. Long may their splendid work continue.

An original musical with music and lyrics by Tony Award-winning composer, Jason Robert Brown, (Parade, The Last Five Years, Bridges of Madison County) and book by Dan Elish and Robert Horn, it premiered on Broadway in 2008 and is the only Broadway musical ever with a cast and band entirely made of teenagers.

13 The Musical is an hilarious, coming-of-age musical about discovering that “cool” is sometimes where we least expect it. Geek. Poser. Jock. Beauty Queen. Wannabe. These are the labels that can last a lifetime. With an unforgettable rock score, 13 The Musical is a musical about fitting in – and standing out! Evan Goldman is plucked from his fast-paced, preteen New York City life and plopped into a sleepy Indiana town following his parents’ divorce. Surrounded by an array of simpleminded middle school students, he needs to establish his place in the popularity pecking order. Can he situate himself on a comfortable link of the food chain… or will he dangle at the end with the outcasts?!

Composed of a precocious cast, no character in 13 is older than the show’s title. The cast is comprised entirely of teenagers, but the stories that come to life here are ageless, the emotions they explore timeless, the laughter and the memories they provide priceless.