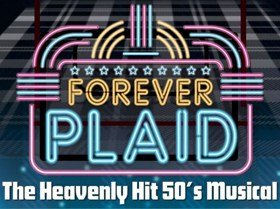 Forever Plaid billed The Heavenly Musical is about a harmony group who were tragically killed on their way to their big break as a bus load of Beatles fans careered into them. Now in a strange twist of fate 50 years later in the afterlife they are able to perform for one last time the show of all shows, the break they longed for. “What’s the worst that can happen, we’re already dead?”

Previously on stage in the 1990s this genius of a show returns to the St James Theatre, an ideal home for the quartet’s final gig. An intimate setting like a real cabaret show where the guys can interact with their audience. Although there is no real story there is a sense of live life while you can as you never know what may happen and the stunning vocals have you on the edge of your seat.

Frankie, Smudge, Sparky and Jinx became friends at high school and they soon realised they all shared the same passion and enthusiasm for music. As a harmony group the casting of Jon Lee (S Club 7, Les Miserables and Jersey Boys), Keith Jack (Any Dream Will Do, Joseph and the Amazing Technicolor Dreamcoat and Only the Brave), Matthew Quinn (Dreamboats & Petticoats) and Luke Striffler (Hairspray and Avenue Q) is exceptional  -their harmonies are nothing short of mesmerizing – the way they sing as a quartet you would believe they had been working together all their lives.

Alongside the outstanding songs from the 1950s and before, there is also humour. The humour really does make the show as the audience are left laughing so hard that their faces hurt, with comic moments that you just do not expect. ‘The Plaids’ have a hard time remembering the set list, the songs, the words and the moves, but alongside the awkwardness, the messing around and the shyness is the music. The songs that are chosen for Forever Plaid are not necessarily ones you will know but there are a fair few catchy numbers that will stay with you long after leaving the theatre. Tracks that stood out were the well built up ‘Perfidia’, the funny ‘Crazy ‘Bout You Baby’ and I have to mention the ever impressive Jon Lee’s vocals in ‘Cry’. Jon’s character Jinx is extremely shy but when he sings the change is outstanding.

As the show carries on you see each of the guys growing in stature at having performed the songs they have loved for so long. ‘The Plaids’ take on the Beatles classic ‘She Loves you’ was impressive and extremely well arranged and performed.

Catch Forever Plaid while you can as the run is extremely short with the heavenly show ending on the 24th April 2016.

Aria Entertainment and Guy James Present
Forever Plaid
Join the boys of Forever Plaid on a humorous ‘heavenly’ journey through some of the greatest close-harmony songs of the 50s.

With one final chance to give the concert they never gave, The Plaids sing nostalgic hits “Rags To Riches”, “Love is a Many Splendored Thing”, “Catch A Falling Star”, “Three Coins In A Fountain” and many more – all in glorious harmony with patter that will keep any audience rolling in the aisles.

Come enjoy a drink at the beautiful St James Studio Theatre, whilst The Plaids deliver a 50s roller-coaster ride of comedy and music in this classic musical.