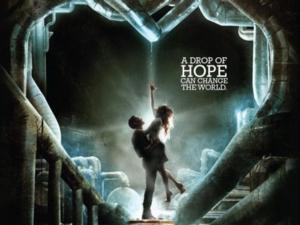 Urinetown The Musical at St James Theatre is certainly the talk of the town at the moment and I can certainly see why. A show filled to the brim with great songs, dance and laughter, and with a cast oozing with talent, there is no doubt at all that this show should get the West End transfer it deserves.

Urinetown (with music and lyrics by Mark Hollmann, and book and lyrics by Greg Kotis), tells the story of a city where everyone has to pay to pee or else they are dragged kicking and screaming to the unknown hell which is Urinetown.

Director Jamie Lloyd has not only brought out the pure hilarity in this production, but he has also juxtaposed it greatly by producing some very dark and at times extremely gruesome scenes .

This show has outstanding ensemble numbers with intricate choreography by Ann Yee, and it is all performed on a dark and dingy revolving stage. Such was the excitement, I was literally on the edge of my seat for the entire performance.

Led by Richard Fleeshman who plays the rather quirky hero of the story, this show is spurting out amazing talent left right and centre, there is not one weak link.

Jenna Russell is a delight to watch as usual and I must not forget to mention the adorable “Little Sally” played by Miss Karis Jack. She has the audience wrapped around her little finger and rightly so, a small bundle of huge talent who is destined for stardom.

Although I have only mentioned a handful, all of the cast are phenomenal.

The show-stopping number “Run Freedom Run”, received a fully deserved and long-running (probably the longest I have ever witnessed), round of rapturous applause.

Urinetown The Musical has the right balance of laughter, sadness and gore. It’s refreshing to see a show which doesn’t take itself seriously and a cast who all completely throw themselves into this crazy whirlwind of a plot.

If you want to see blood, laughter, tears, and talent, this show is definitely the one for you. It is advertised as strictly limited but I am keeping everything crossed for a transfer. However I do advise you to book now, and then again as you will want to see this show more than once, I certainly do. You need to “run runna run run run” straight down to the theatre and catch a performance of this amazing production before tickets are all dried out!

URINETOWN: The Musical – Presented by Julian Stoneman Associates and The Araca Group
In a city of the future that has been inflicted with a terrible drought, business tycoon Caldwell B. Cladwell has made his fortune through bribery and the monopolization of all public toilets. With a brutal police force maintaining law and order, it’s not a place to get caught short! Risk it and you will be sent off to a place no one returns from – the infamous Urinetown. The city needs a revolution and every revolution needs a hero… however unlikely.