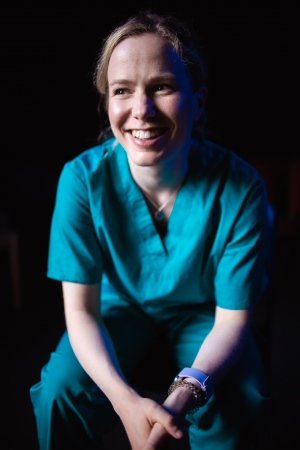 For many years I believed in the principle that the only sort of ‘stupid question’ is the one that isn’t asked. But that was put to the test when someone once asked me, in all seriousness, what time the local A&E department closes. I suspect it’s the kind of story Amy (Tania Amsel) would like, given her ability to see the humour in frustrating situations. The busy life of frontline workers in the NHS has been well documented elsewhere, including the Channel 4 Television documentary 24 Hours in A&E, which is now into its nineteenth series, and Adam Kay’s book This Is Going To Hurt, which has since been accompanied by a live touring production, including runs in the West End and at the Edinburgh Fringe. And then there was the junior doctors’ strike in 2016.

This show very much confirms what those other sources, and others, have to say about the pressures which medical professionals must work under. The narrative focuses on Amy’s personal story, rather than getting into the politics of how the NHS is managed (or rather mismanaged). A lack of resources has been an ongoing issue for so long that Amy seems, at least at face value, to be handling the demands of her job rather well. It can be reasonably assumed that she knew what she was letting herself in for.

A paediatric emergency case, however, proves to be the trigger for a repository of childhood memories to come flooding back. The details of either story would be giving too much away, suffice to say even a trip from Swansea to London for an interview at Great Ormond Street Hospital results in yet more reminiscing. The contrast between seeing Oxford Circus and its immediate vicinity through a child’s perspective (bright lights and an array of shop displays) against seeing it as Amy did in adulthood (an overcrowded and rather stressful place to be) resonated well with me.

There are no definitive solutions to the problems that Amy finds herself encountering for the first time, which is realistic enough – it appears she must try to do the best she can whilst carrying on living and working. While mental health is rightly continuing to be a hot topic, there is still some way to go in terms of practical and accessible solutions for everyone who could benefit from them.

Amsel has an engaging manner, and as with many single performer shows, the direct addresses to the audience help significantly when it comes to connecting with the play. It is brief (and for its run at the Old Red Lion Theatre, presented as a double bill alongside a production of Charles Dickens’ The Signalman) but one gets the feeling, especially as Amy is dressed in hospital ‘scrubs’ and name badge, that having taken the time to tell her story, she’s already dressed for her next shift, which will start imminently. This assertive and hopeful production is encouraging for many people in many professions who face difficult circumstances, both personal and professional, head on every day. I know I could be more like Amy and do better to maintain a sense of humour in tough times.

Tania Amsel’s upbeat and heartfelt new one-woman play brings the life of junior doctors in A&E over the holiday season to light. Amy is an example of the thousands working in the NHS – and by making her story personal and relatable, the audience can join in Amy’s journey exploring her past, which is inextricably linked to her stressful life in a hospital A&E department and what the future may look like. The show is supporting the Great Ormond Street Hospital by raising awareness of childhood cancer, plus supporting mental health charity SANE and the impact of staff’s mental health in a busy hospital.

“My next patient is… Santa, smelling strongly of booze, he attempted to climb down a chimney, safe to say it didn’t go to plan..”

It’s Christmas Eve in Swansea A&E and Amy has just vomited all over a hot doctor’s shoes. Amy is not a patient at the hospital… she’s a Junior Doctor… Hoping to secure a transfer to Great Ormond Street Hospital in London, Amy can handle the long hours, the overtime, and even the shame of vomiting on her colleague’s shoes; but when assigned to the case of a boy with cancer, Amy is confronted with childhood memories she thought she’d forgotten and the pressure begins to take its toll. When helping others is at the heart of your career, what happens when you are suddenly the one that needs help?

Playwright and performer Tania Amsel has written for the Tron Theatre Glasgow and Women@RADA. She has performed in Bloody Men (Arcola Theatre), Just To Get Married (Finborough), Chatroom (Etcetera Theatre), At War With Love (Edinburgh Fringe), Lollipop (Monologue Slam), The Dance Hall (Blue Elephant), Never Have I Ever (Arcola), and Exchange & Mart (BAFTA winning short film).