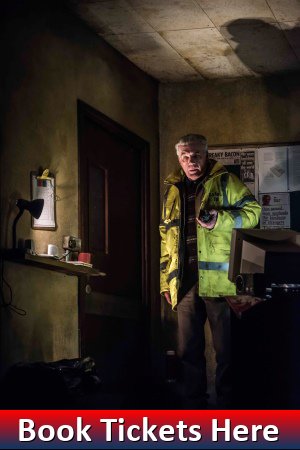 As the nights draw in, thoughts turn to the autumn and winter celebrations. Right now, that means Halloween and for those of you that like a bit of a fright in your life, I can offer you no better play that Ghost Stories at the Ambassadors Theatre.

This is a show where, rather like The Mousetrap next door, they ask the audience to keep the secrets and I can fully understand why. As plays go, whilst not being truly immersive, Ghost Stories is a production that needs to be experienced. Jeremy Dyson and Andy Nyman have written a fascinating set of stories. The tales are linked together by parapsychologist Professor Phillip Goodman (Simon Lipkin) who has recorded each event and provides his own, more down to earth, ideas of what happened to elderly night watchman Tony (Garry Cooper), wayward teenager Simon (Preston Nyman) and city financier Mike (Richard Sutton).

And there is nothing to fault in this production. I both love and hate horror stories and this is a show where every element comes together to produce a desired effect. From entering the theatre, where industrial lights replace the normal grand fixtures, and seemingly random numbers are scrawled on the walls, the audience is immediately drawn into the world of Ghost Stories. Designer Jon Bausor has put together an amazing set which, along with lighting by James Farncombe and sound by Nick Manning create a perfect atmosphere for both Professor Goodman’s lecture and the stories themselves.

There is a surprising amount of comedy in the script but also, some really spine-chilling moments of horror along with many moments where everything is in place to totally mess with the audience’s mind. The important thing for an audience member is to let themselves be drawn in and be prepared for anything – though just to warn you, whatever you think is going to happen, you are pretty much guaranteed to be wrong. Its difficult to say much more without giving things away. But I can only say I was totally hooked from the start. Apart from glaring at the person next to me who kept looking at their phone – believe me there was some serious tutting from my seat – my eyes were fixed on the stage the whole time. The production makes use of every trick in the book to get the story over and, even an old seasoned theatregoer like me found it impossible not to be emotionally affected by this wonderful show.

There’s something dark lurking in the theatre. Enter a nightmarish world, full of thrilling twists and turns, where all your deepest fears and disturbing thoughts are imagined live on stage. A fully sensory and electrifying encounter, Ghost Stories is the ultimate twisted love-letter to horror and an edge-of-your-seat theatrical experience like no other. Be it phantoms, poltergeists or simply a ‘bump in the night’, let’s play a game with fear.

After exhilarating audiences across the world with record breaking, sell-out productions and a smash hit film, Andy Nyman and Jeremy Dyson’s worldwide cult phenomenon Ghost Stories is back to haunt the West End- and it’s more spine-tingling and fantastically terrifying than ever.

Are you brave enough to book?
Please note: Ghost Stories contains moments of extreme shock and tension. The show is unsuitable for anyone under the age of 15. We strongly advise those of a nervous disposition to think very seriously before attending.