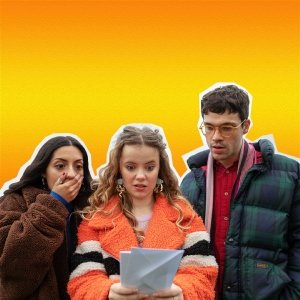 I have been interested in climate change since well before Greta Thunberg made the topic fashionable, both on a personal level trying to reduce my carbon footprint, and on a professional level, doing research into fuel cells. So, I was very excited when I read that How To Save A Rock, a show described as a “multi-award-winning musical comedy about how to still have hope”, was coming to the Vault Festival, after its well-reviewed run at the Edinburgh Fringe Festival.

The show is presented by Pigfoot Theatre company, starring Stephanie Ocampo, Antonia Strafford-Taylor, and Will Stevens and is directed by Bea Udale-Smith. It tells two separate stories that converge towards the finale: on one side there is a group of environmental scientists from the University of East Anglia whose emails get hacked in 2009 just before the United Nation Copenhagen Summit; on the other side there is Frankie, a twenty-something disillusioned environmental activist, living in 2026, that embarks in a surreal quest with a couple of friends to save the last polar bear that for some unknown reasons can write letters and is located in a remote place in Scotland.

Frankie and her friends depart on a road trip to Scotland by car, then by train, then walking, and along the way, they encounter a lot of environmental protests and manifestations against the big powers (governments, corporations, etc..). Basically, the background is that in 2026 the world has reached 8 billion people, climate change is accelerating, a lot of animals are already extinct, polar ice caps are gone, and people are desperately trying to find a way to save the planet.

All this background story should be the pretext for a reflection on how people can really help tackle climate change, considering that the “10% biggest company in the world are responsible for 71% of global emissions”, so anything each one of us can do may seem pointless. One interesting thing about the show is that it is presented as “carbon-neutral” because the electricity used during the show is either produced through solar panels or by a couple of bicycles on stage that are operated alternatively by the actors or by volunteering members of the audience. While this is an interesting idea, it creates the first problem in the show: the Vault venues are below Waterloo Station in London, so between the noise of the trains passing above, and the noise of the bikes generating electricity it was not easy to listen to the show. The second problem is that this “musical comedy” only has 3 songs (music provided by a talented accordion player), all of which rather forgettable. The third problem is that there were not many reasons to laugh, just a handful of chuckles.

The fourth problem is that I did not buy into the plotline, rather confusing, or in the dialogues, rather artificial on a few occasions. As a result, I struggled to keep the attention for the 60-minute duration, even if the actors really did their best to bring to life the story and to entertain the public, and even if there were a handful of truly poetic and atmospheric moments.

I left rather disappointed by the production and rather saddened by the missed opportunity to engage the public in a fun way about climate change.

It’s 2026, and we’ve found a letter from the last ever polar bear. He’s somehow ended up at the top of Scotland. We’re going to save him.

Join us on a wild polar bear chase, through peat bogs and protests. We might just need your help…

How To Save A Rock is a multi-award-winning musical comedy about how to still have hope – for kids and adults alike.

This show is carbon-neutral. The lighting is powered by solar-power and a bike cycled live on stage, production materials are recycled and recyclable, and all music is created live.