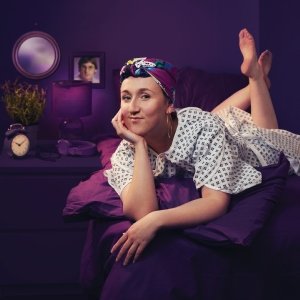 It is easy to get overwhelmed by the amount of different shows that the Vault Festival offers; while the quality is generally very high, there are productions that should not be missed. So, let me help you: Madame Ovary by Rosa Hesmondhalgh (Wildchild Productions) is a must-see one-woman show that will make you laugh and cry, often at the same time and it is one of the best ways to spend an hour of your life.

In February 2013 at the tender age of 23, Hesmondhalgh was diagnosed with cancer: the year had started reasonably well, with a lot of resolutions to take better care of herself, and with a promising first date with a guy from Tinder. However, Hesmondhalgh felt bloated and constipated and decided to go to A&E to get something to cure what she believed was trapped wind. Unfortunately, the doctors soon realised that something was wrong with a rather obscure organ called ‘Omentum’ and further investigations lead to the terrible conclusion: ovarian cancer and the need to start chemotherapy as soon as possible.

Hesmondhalgh tells the story of that dreadful period of her life: she takes the audience through the long waits in A&E, the periods all alone waiting for doctors, the desperation when the diagnosis was confirmed, the chemotherapy, the awful side effects, and the battle to survive. We meet some wonderful people that helped her during this period, from her family and friends, to nurses, fellow patients and even Louis Theroux (will not spoil why or how). This is a real story, so do not expect a completely happy ending, but, spoiler alert, Hesmondhalgh survives and beats cancer.

Cancer is something that touches nearly everybody in one way or another over the course of a lifetime; in the last year two people close to me went through chemotherapy and I know a little about what a distressing experience it is: it is one of those few things I am really scared about.

However, Hesmondhalgh manages to tell the story clearly and honestly, in a very beautiful and touching way; she has a very clever sense of humour, succeeding in making the audience laugh even at the darkest points. It is a roller coaster of emotions – one moment I was laughing with gusto, another moment I was crying like a baby, and at no point did I lose interest in the story. Hesmondhalgh’s ability to hold the audience’s attention is phenomenal and the only prop she uses is a PowerPoint presentation and a handful of videos. The show is a masterpiece of storytelling, mixing humour and deep emotions and one of the best one-woman shows I have seen so far.

Clearly the topics in the show are not easy listening, there is a lot of sadness, desperation and death is a constant
presence, however, I found it very beautifully woven, and the message of hope at the end was in some way cathartic and I even managed to learn a few things like what ‘omentum’ is (a big sheet of fat covering the intestines) and the importance of just being there for people going through similar ordeals. In summary, it is a great emotional must-see show, performed by a hugely talented artist; I hope to see more of Hesmondhalgh in the future.

It’s January and Rosa is writing her resolutions. This is her year. She is going to stop going out with plonkers, start doing yoga and write some really good art. But before she’s had time to delete her dating apps and get into downward dog, she’s diagnosed. With ovarian cancer. And it’s spread. Suddenly faced with hospitals, chemotherapy and her own mortality, Rosa’s new goal for the year ahead is to survive it. Based on Rosa’s real-life blog, Madame Ovary explores the typical struggle a 20-something has with trying to stay relevant and the less typical struggle of trying to stay alive.