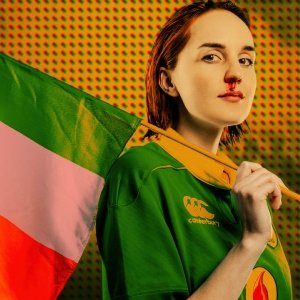 Notch (directed by Madelaine Moore) is a very topical one-woman show written and performed by Danaja Wass, a young Croatian artist, tackling issues like immigration, xenophobia, mental health, sexual assault, homosexuality and homelessness (just not to miss any difficult topic). Clearly, this is not a light-hearted performance, it is intense to the point that the flyer of the show has the phone numbers of the Samaritans and Crisis UK in case “you have been affected by issues in the play”.

Wass tells the story of a Slavic immigrant, arriving in Dublin in search of a better life (a tale as old as time); unsurprisingly, Wass’ main character struggles in the Irish Capital: she is alone in a new country, she does not have money and she is not welcomed by everybody. By alternating episodes from the present life in Dublin with flashbacks, the audience learns a bit more about the character, her life before Dublin and the difficulties faced in the Irish capital, from sexual assault in a hostel, to an unrequited love for a female colleague, to suicidal experiences.

I really wanted to love the play, because as an immigrant and as a person that struggled with mental health issues, I am really interested in some of the topics covered by the play and can relate to. However, while I enjoyed most of the show, there is an awful lot going on and too many matters being covered in just one hour. The non-linearity of the story does not help either, contributing to the confusion that leaves the audience trying to piece the story together; the sheer volume of topics covered and different episodes presented means that a few of them are not explored with the depth they would require and some situations are played down just to stay on time.

It is a slightly disappointing experience, because Wass is a hugely talented artist, very expressive, emotional and able to shift among different characters at the drop of a hat; some episodes are beautifully written, few monologues are deeply emotional and written in a poetic and elegant English. The staging and lighting are also very appropriate to the story and mostly support the narrative, highlighting the key moments. However, the story requires either a trim down and a streamline, or more time to better develop all the themes; some passages try to be so grand that I really struggled to follow them, and I found my mind just going for a stroll. I think the ideas and the talent are there, they just need time and space to grow. I hope to see more writing and performances from Wass in the future, because I think she has the skills to succeed. My only unrequested advice is summarised in the immortal words by architect Ludwig Mies van der Rohe: sometimes “less is more”.

A girl. An empty street. A half-eaten Subway.
And you. And you passing in the rain. Turning the corner when I saw you.

A.A. is moving from Eastern Europe to the promised land of Guinness and gift shops: Dublin.

Everyone says she’ll do well ‘cause she owns slacks and knows how to spell. But it turns out that you don’t just grow out of working in retail. Or get on the property ladder. Or ascend the corporate ladder. Or own a ladder… without money.

NOTCH is new solo show about sleeping rough on the streets of Dublin, exploring the links between xenophobia, mental health and homelessness. Croatian writer/actor Danaja Wass draws on her own experiences of a capital that has become increasingly polarized and daunting for people who are seen as foreign, inadequate, alien or simply ‘other’.