Home » Reviews » Play » It’s Beautiful, Over There at the Tristan Bates Theatre | Review 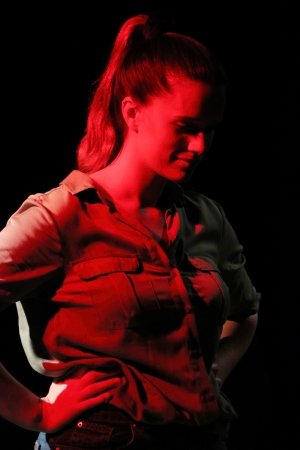 It’s Beautiful Over There is a story of death. We are warned this from the start and stories of death are what we get. As Stephanie Greenwood (Steph) takes us through the stories of the deaths of various relatives, we are made very aware that this isn’t really the story she is intending to tell us. But, it is easier to tell the stories of the deaths of ancestors she never knew, and even the deaths of the older generations that she did, than it is to tell the story of her friend’s suicide. Thus, throughout the show, we are fed small snippets of the real story in between the stories that are easier to tell, and easier to listen to.

Steph is a true performer. She adopts a range of characters on the stage from younger versions of herself to imagined versions of her ancestors, all of whom are totally convincing and utterly compelling. The storytelling is brilliant and it is impossible not to get swept along in the joy, and the sadness, of her tales. The sound and lighting design only add to the performance, clearly delineating jumps in time and space, and, particularly significantly, the sound of glass shattering every time Steph gets close to talking about her friend’s suicide adds a layer of meaning.

Towards the end, we finally reach the tale of Lindsay, Steph’s friend. We are told a small part of her story and there is an especially poignant moment involving origami birds. I would have liked to hear more, but I’m also glad I didn’t. What made this show so good was the fact that it found a new way to tell stories of suicide which have become quite a common theatre topic (see the recent opening of Dear Evan Hansen as just one very high profile example of this).

I’ve seen many plays about mental health told in many different ways in the past year, some at the Edinburgh Fringe where It’s Beautiful Over There transferred from and some which have come to London since, but none have quite engaged me quite as much as this one, due to its more subtle nature.

In summary, this won’t be the easiest night at the theatre you’ll ever have, it’s emotional and difficult, but it’s also brilliantly told, beautifully written and involves a free chocolate cupcake, so it comes highly recommended.

Steph’s dealt with death before. This one’s different.

Steph has stories to tell you. She wants to tell you about her birthday, her heroic grandmother, and how her ukulele playing is coming along. She definitely does not want to tell you how it feels to lose a friend. She could if she wanted to, it’s not that she can’t, it’s just that … well, you don’t want to hear that anyway, do you?

It’s Beautiful, Over There is a close look at the hard work of telling the stories that matter the most.