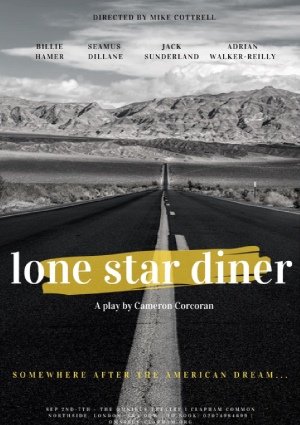 Isn’t practically every waitress working in an American diner wanting a better life for themselves? June (Billie Hamer) is no exception, working for Larry (Adrian Walker-Reilly), one of those berating managers who seems to derive some sort of macabre pleasure in giving June a telling off in front of paying customers. One of them is Cyrus Blake (Seamus Dillane), who hasn’t said much to June apart from exchanging pleasantries and stating what he would like from the menu, but witnessing a dressing down from Larry provokes him into encouraging June to not just stand there and take it.

Well, actually, he demands – a strong word but nonetheless reflective of his sudden assertiveness – much more than simply standing up for oneself. There’s something almost stereotypically American going on in this play: not for nothing were there signs on the entrances to the auditorium warning patrons of the sound of gunfire. Here, the way to resolve an impasse is through the power of the bullet. It might as well be a Wild West motion picture.

Alas, there aren’t any wooden swinging saloon doors or cowboy hats. Billy Lee (Jack Sutherland) arrives at the diner, a police officer who comes to offer victim support after June claims self-defence in the light of an incident that is too much of a spoiler to state explicitly (sorry). It transpires that he asked to take on the case (as opposed to being assigned to it) in part because he knew June had been to school with his brother. He has his internal struggles, for reasons explained in the narrative, and bizarrely does something highly unprofessional, which June rightly calls him out on.

None of the on-stage characters are particularly likeable. Billy Lee, while earnest, tries too hard, and pays June too many visits at her workplace, without having pre-arranged to meet. He does, at least, provide moments of comic relief (I was bemused at his sudden request for June to run away with him and start a new life elsewhere), and some of his mannerisms are somewhat ill-fitting for someone who is paid to deal confidently and assertively with criminals as well as members of the public.

The play starts at a slow, if comfortable, pace, but thankfully speeds up before too long. The audience is, by and large, taken by surprise at the sudden gear change, though I suspect some discerning patrons will have seen it coming. The action ebbs and flows rather like the amount of footfall in the diner varies during the day, but the result is far from discordant – the changes in pace are quite naturalistic in a production that keeps all of its on-stage action in the diner of the show’s title.

Some further work needs to be done to some of the scene changes. At the start of the second half, the re-emergence of Larry through a series of blackouts and lighting changes is somewhat overkill – the dialogue is more than sufficiently detailed to explain what is going on. June is a well-developed character, who remains composed whatever is thrown at her. Refreshingly, she is neither shrinking violet nor screaming banshee. Cyrus, I thought, was somewhat less developed, given his amount of stage time – I thought I got to know about him, which isn’t quite the same as knowing the character himself.

All things considered, however, it’s a hard-hitting show (in more ways than one), and an intriguing portrayal of vulnerability, frustration and determination.

Somewhere after the American Dream…
June works in a diner in the middle of nowhere, somewhere in the New Mexico desert. She earns three dollars an hour, and there aren’t enough customers to make the tips worthwhile. After a conversation with a customer, June is forced to look at her life: where she’s gone wrong and what’s she’s prepared to do to change that…