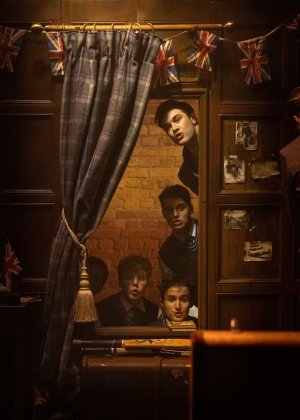 A cast of fourteen are, I don’t think, ever seen entirely together except at the curtain call – as the show’s title suggests, Tom Brown’s School Days is set in the youth of its principal character. This being a public school, the cast list has the schoolboys down by their given names (irrespective of whether they correspond to their actual surnames). The production is keen to emphasise that the ways of the likes of Rugby School helped to breed (so to speak) a generation of leaders, such as the captains, majors and lieutenants (and others) who led troops into battle in the Second World War against a formidable Nazi Germany.

The show is a play with songs and hymns, and hymns with modified lyrics, rather than a full-blown musical. The schoolboys do not, for instance, suddenly burst into a song and dance routine in the common room. It portrays, true to the spirit of the Thomas Hughes 1857 novel, school life as being difficult and full of unwritten codes to be observed. The director’s note in the show’s programme draws a parallel between the public schoolboys of the play and the Government voted into power in the 2019 General Election. Without getting into the whys and wherefores of voter intentions, it is indeed generally true that a disproportionate number of publicly educated people (of various political persuasions) are in positions of power and influence in today’s society, and therein lies the narrative’s relevance to the twenty-first century.

But the Rugby School of the play is hardly The Riot Club (for which read The Bullingdon Club) of the Laura Wade 2010 play Posh. Even the very worst excesses and acts of bullying, which tastefully take place off-stage, are ultimately not gone unpunished, however well-regarded certain pupils may or may not be amongst their peer group or indeed the teaching staff. Dr Thomas Arnold (James Horne), has quite plausibly come out of retirement to serve as Rugby’s headmaster because the Second World War has taken so many of the school’s teachers away to the frontline. His style of leadership is controversial in some circles, but he is consistent in his principles. He does not, when the occasion calls for it, mince his words, going as far as to describe someone he expels – a mere schoolboy, mind you – as “poisonous and corrupt”.

The set works remarkably well in the performance space, allowing the show to switch between staff room, common room, bedroom and classroom (and so on) with minimal fuss – and yet it is abundantly clear each and every time where each scene is set. The use of actor-musicians is good to see, and the production achieves success where a good number of previous productions (by various production companies) at the Union Theatre have fallen rather short: the voices of the actors and the accompanying music is perfectly balanced – by the use of acoustic instruments. There’s not a line missed. Just occasionally, the limitations of staging come through but are easily overcome by exposition rather than dramatization.

Hudson Brown’s Tom Brown wasn’t exactly truthful when he tells Flashman (Alex McKeon) that he can’t sing very well, though I hasten to add it is an entirely forgivable lie, even if Dr Arnold may beg to differ on that point. There are no weak links in the large cast to report. Some twists in the plot leave Brown having the trust and confidence of his classmates gained, lost and restored in this curious and compelling production, gripping from beginning to end. Things may have been riotous and uncomfortable at times, but the messiness and the whole gamut of emotions throughout the play make for a riveting experience.

Thomas Hughes’ Tom Brown’s School Days, in a new adaptation with a WW2 setting, looks at the formative years of the upper class young men who’d go on to lead the armed forces to victory.

This new adaptation by Phil Wilmott with musical arrangements by Ralph Warman is based on the classic novel of the same name by Thomas Hughes. This story is set at Rugby School, a public school for boys, which Hughes attended from 1834 to 1842. The play, with music, follows the trials and tribulations of young Tom Brown as he is introduced to the traditions and ingrained dormroom rules of the public school. As a boy of principle and bravery we see Tom struggle with his fellow classmates and the most viscous of bullies.

Tom Brown’s School Days has been the source for several film and television adaptations. It also influenced the genre of British school novels, which began in the nineteenth century, and led to fictional depictions of schools such as Billy Bunter’s Greyfriars School , Mr Chips’ Brookfield and St. Trinian’s.