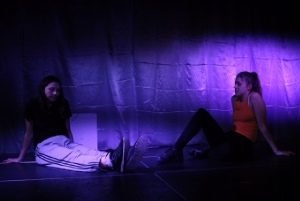 Fleeting moments of physical theatre and abstract video projections permeate this unusual production. Thea (Sophie Fox) is doing research for her PhD, about why there are women murderers – their motivations and justifications. Kelsey (Amelia Gann) agrees to participate in ‘research’ (inverted commas mine), which gradually becomes something of a personal friendship rather than a series of researcher-participant meetings with cordiality. But this isn’t a play about ethics – that bridge was well and truly burnt when Thea reveals where she lives, and then again when Thea does something that Kelsey never gave permission for her to do.

Kelsey was in a relationship that turned sour because her significant other, Luke, started mistreating her. Thea, who has a penchant for terminology, almost immediately labels the relationship as one containing “coercive control”. Thea also has her reasons for disliking the term ‘offender’ and tries to assert that Kelsey is herself a victim. Kelsey, with justification (in my view, anyway), is having none of it: she is in prison having committed murder and recognises that what she did was indeed an ‘offence’.

An attempt is made at ‘creative and wellness therapies’, but it soon becomes clear that Thea is rather out of her depth, at least in part because Kelsey’s life experiences to date are so markedly different from her own. As the purpose of their meetings is for Thea to gather evidence (if that’s the right word) for her thesis, there’s a reluctance on Thea’s part to reveal nearly as much about herself as Kelsey has divulged about herself. This does not, in context, equate to character underdevelopment, because the formalities are dispensed with. Although there are certain red lines that remain to the end of the play, by talking instead, for instance, about a bad experience with another driver whilst out on the roads, Thea’s true personality is gradually made clear to Kelsey, and thus to the audience.

The scene transitions often involved a soundscape and some physical contact, often positive but occasionally violent – one appears to be a re-enactment or reimagining of some sort of Kelsey’s crime. Thea, of course, probably would take umbrage at the word ‘crime’, perhaps arguing that Kelsey was acting in self-defence. The play would have benefited, particularly given its title (derived from the name of the part of the brain that stores emotional memories), from a greater exploration as to what brain functions lead someone to feel the actual need to take the life of another person, as opposed to someone who fleetingly contemplates doing so in the heat of (for instance) a marital argument, but would never in a billion years act on such compulsions.

There are some thought-provoking points made about the criminal justice system (or what some would call the criminal injustice system), and whether it sufficiently takes into consideration the circumstances within which a crime against the person is committed. Kelsey is no shrinking violet, demonstrating that survivors of domestic violence can knuckle down and continue to get on with things, which somewhat rolls against the tide of contemporary advice about reaching out for help through support groups and voluntary organisations providing a helping hand. The point, it seems to me, is that there are a variety of ways to deal with Kelsey’s “situation” (Thea’s choice of word) and there is no such thing as a solution that will be suitable for everyone.

A brief but meaningful play, this production does well to bring such a personal story to life. I don’t fully agree with all the assertions the play makes, but it is bold enough to make them, which if anything makes for good conversation in the bar afterwards. An engaging and enthusiastic production.

Kelsey is in prison serving a life sentence for murder. Thea is doing a PhD and thinks she knows everything there is to know about women who kill. But, as her friendship with Kelsey deepens, Thea realises she doesn’t know the first thing about fear or what it can make a you do. Based on true events The Amygdala is a brutally honest portrait of the life of a woman in prison that explores the limits of our capacity for empathy and forgiveness.

Inspired by the true story of Sally Challen, The Amygdala is influenced by research conducted by Sophie Fox in partnership with Justice for Women; a legal organisation that supports and advocates on behalf of women who have fought back against or killed violent male partners.