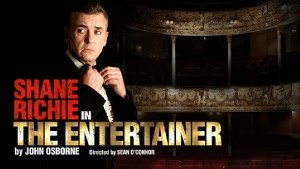 They may not have called it a state-of-England play back then, but when The Entertainer was premiered in London in 1957, there could have been no doubting the author’s intention. Here he was depicting a fading music-hall hero desperately hanging on to his old and once-reliable repertoire of jokes while the newer media of TV and cinema were stealing the audiences from under his nose.

Since Archie Rice’s routine is so entrenched in the prewar tradition, it was easy to see his demise as representative of a broader British decline. Easy but not inaccurate.

Now, in a new touring production, this week at Woking’s New Victoria Theatre, Osborne’s preoccupation with Britain’s vanishing greatness is given a fresh relevance, as is so much else, by the dramatic age of Brexit and its
swerving plotlines. In the play’s first outing, Rice was played by no less a star than Laurence Olivier who was waging his own war with the passage of time and the invasion of the old by the new.

In this latest production, directed by Sean O’Çonnor, the play’s biography has been further enriched by its setting a quarter of a century later than Osborne’s. The Suez crisis, so present in the playwright’s and the nation’s consciousness in 1956, has been replaced by the Falklands War of 1982. It’s a bold graft, not an irresponsible one, and it does of course give the opportunity for presenting the then Prime Minister Margaret Thatcher as a comic grotesque as broad as music-hall.

The transition works because the conflict in the remote South Atlantic was as controversial as Suez, though rather less bungled, and brought back all the linguistic and patriotic (some would say jingoistic) paraphernalia of world war like some hoary old trouper being wheeled back on for an encore.

Far from dating the play, these historic overlays contribute to its enduring pertinence in a Britain, or more particularly an England, whose divisions recall with an uncanny geographical accuracy the rifts of the seventeenth century.

The title role is a hell of a thing, which now comes with an awesome roll-call attached: first Olivier, but then such greats of their own times as Max Wall (1974), Peter Bowles (1986), Robert Lindsay (2007) and Kenneth Branagh
(2016). Shane Richie is a worthy inheritor as his Archie bears the guttering vaudeville flame before us with a mix of defiance and humour. He is walking a virtual tightrope between his need for an audience and his contempt for its
members. He knows the gags are old, but age should be no reason for binning a good thing. Yet that is precisely what this new England is doing to him, just as it did to his own father before him. It’s hard to laugh at obsolescence when you’re the butt of it. Hard, but not impossible, and Richie brings off this particular trick with all the experience born of an exceptionally varied career-EastEnders, hefty stage leads and, as relevant as any for present purposes, TV game show host. Never mind Olivier and Co being hard acts to follow, Archie Rice is a notoriously hard one to act.

And because this act of Archie’s is always threatening to upstage the indoor goings-on of his family – old Dad, second wife, grown-up kids – it’s easy to forget the fact that The Entertainer is in its own way as kitchen-sink as
Osborne’s earlier hit Look Back in Anger. Thanks to the poignancy evoked by this domestic cast – Pip Donaghy, Sara Crowe, Diana Vickers and Christopher Bonwell – as they mourn the death of the soldier brother in South Atlantic, there are moments when the production seems to reach right back into a Rattigan mode.

As I understand it, Olivier was at first bemused by Osborne’s success with Look Back In Anger. At the time, the American playwright Arthur Miller was over from the States with his wife Marilyn Monroe, who was here for the
filming of The Prince and the Showgirl. He told Olivier he should take a close look at Osborne’s writing as there was real merit here. The actor not only followed his friend’s advice, he soon after wondered aloud to Osborne whether he might perhaps feel like writing a play with a part in it for him.

The rest is now historical drama, made urgent by what a beleaguered Prime Minister of that decade, Harold Macmillan, described as “Events, dear boy. Events.” As for the play, well, yes, it may come from music-hall but, as Richie and his troupe demonstrate, it explodes in all directions, hitting the high places but also blasting the hearth, taking no prisoners as it goes.

John Osborne’s funny and heart-breaking play The Entertainer opened last week at the Curve in Leicester and is touring around the UK until 30 November 2019. It stars stars Shane Richie as Archie Rice, Sara Crowe as Phoebe, Diana Vickers as daughter Jean, Pip Donaghy as Billy and Christopher Bonwell as his son Frank Rice

Archie Rice, the snarling protagonist of John Osborne’s classic The Entertainer, is a washed-up, old-school comedian and second-rate stand-up still stepping out, well past his prime, to deliver out-of-date gags.