Dr Anna LaRosa (Dr Stefania Licari) has a lot to say. Just as well, as she’s the only one on stage in this medical comedy, which largely draws its humour from her own experiences in the medical profession, primarily but by no means exclusively in the intensive care unit. ICU could, LaRosa tells the audience, be CCU (critical care unit), or ITU (intensive treatment unit), or indeed something else. The N in NICU, for instance, might be ‘neurological’ or ‘neonatal’, but in any event, LaRosa’s punchline is that by the time you’ve worked out what the right acronym is, the patient who needed intensive care won’t need it anymore, as they will have gone to a better place already, one way or another. 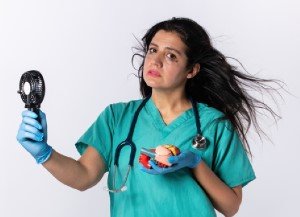 Such is the morbid sense of humour, but this is only (frankly) to be expected in a show set in intensive care. As ever with comedy shows, direct addresses to the audience help maintain interest, and I knew better, despite the venue staff requesting patrons fill up from the front, than to sit in the very front row – the usual exchange of pleasantries between performer and front row were reserved for those who enjoy that sort of thing. Occasionally, though, given the relative intimacy of the venue, people a little further back were interacted with. LaRosa has a running joke about the British stiff upper lip. From an Italian perspective, is the patient not responding because they have lost consciousness, or because they are too bashful to interact?

It’s not all laughs-a-minute: there are stories of rigorous cleaning regimes at the height of the pandemic. I suspect it is unsurprising to some and revelatory to others that for all the applause for key workers that occurred in the first lockdown, there were others who refused to accept the cosmopolitan nature of the National Health Service’s personnel. One woman insisted on an English doctor (thus not only excluding our Italian doctor but Scots, Welsh, Irish and Northern Irish doctors too) and, despite receiving emergency treatment from an international workforce, apparently put in a second complaint as she didn’t want to be looked after by a nurse from the Philippines.

Dr Licari’s Dr LaRosa has an ability to talk about Brexit without eliciting groans (whether actually voiced or not – that British reserve again) from a knowledgeable audience a bit tired of talking about Europe. There was talk, too, of various love interests over the years – the working population of London being as transient as it is, the ones she wanted to hold on to left the capital. As for the ones she felt she had to let go of, there was always a red line that was crossed, resulting in an almost stereotypical Italian melodramatic breakup in the form of a phrase so memorable members of the audience were still repeating it in the venue’s bar after the show: “Basta, basta! Finito, finito!”

A few medical procedures were explained in an entertaining manner. Readers of a squeamish disposition will be pleased to note that not a drop of fake blood is involved. LaRosa was responsive to what was going on around her: the sound of an ambulance siren outside during what happened to be a relatively quiet moment allowed her to stop and sigh sentimentally. The temptation is to compare it to Dr Adam Kay’s This Is Going To Hurt. But this is a more rambunctious show than that, taking sideswipes at the somewhat erroneous manner in which the medical profession is portrayed in drama series like Casualty and Holby City. Best enjoyed by anyone looking for something unique, it’s a delightful show with a broad and relatable storyline.

Told through the eyes of her alter-ego Dr Anna LaRosa (previously seen in online series MY DOCTOR’S ADVICE), MEDICO marries physical gags, ribald humour and true stories from the medical frontline with Stefania’s own experience as an Italian doctor in the UK. You may laugh or cry, but one thing is guaranteed: you will never look at doctors in the same way again.

MEDICO stars Stefania Licari and is co-devised and directed by Chris Head.

This happens to be a timely production: employment has hit the headlines again at the time of writing, this time because of the concept of ‘quiet … END_OF_DOCUMENT_TOKEN_TO_BE_REPLACED

An opera (well, technically, an ‘opéra comique’, as there is spoken dialogue) in a relatively small space like the Charing Cross Theatre calls for … END_OF_DOCUMENT_TOKEN_TO_BE_REPLACED

Shoes, one would have thought, are fairly recession-proof. The problem for Charlie Price (Joel Harper-Jackson, reprising the role he previously played … END_OF_DOCUMENT_TOKEN_TO_BE_REPLACED

The descriptions of what happens in this show are so vivid that paradoxically they leave nothing to the imagination – and, at least at the performance … END_OF_DOCUMENT_TOKEN_TO_BE_REPLACED