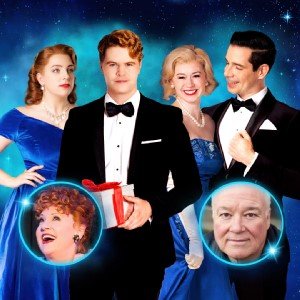 WHITE CHRISTMAS opens at the Truro Hall for Cornwall (12 – 19 November) before visiting the Nottingham Theatre Royal (22 – 26 November), Sunderland Empire (28 November – 3 December) and Liverpool Empire (6 – 31 December). Full casting for the tour will be announced in due course.

Jay McGuiness’ theatre credits include Josh Baskin in Big The Musical at the Dominion Theatre and Rip It Up at the Garrick Theatre, both in London’s West End. He also starred as Sam in new musical Sleepless – A Musical Romance at the Troubadour Wembley Park Theatre. Jay is best known as a member of boyband The Wanted, as well as winning BBC1’s Strictly Come Dancing in 2015.

Hailing from theatrical royalty, Lorna Luft is an iconic star of stage and screen. Her credits include the role of Fran Kubelik in the original Broadway production of Promises, Promises, and the original Off-Broadway production of Snoopy! as Peppermint Patty. Lorna previously played the role of Martha Watson in the 2016 US tour of White Christmas. Her film credits include Grease 2, Where The Boys Are, 54 and My Giant.

Michael Starke most recently appeared in the UK and Ireland tour of Waitress as Old Joe. Further theatre credits include the role of Edna Turnblad in Hairspray, Monsignor Howard in Sister Act, and the Narrator in The Rocky Horror Show, all part of national tours. Michael is best known for his role as Thomas ‘Sinbad’ Sweeney in Channel 4’s Brookside, which he played for 16 years.

Dan Burton reprises his role as Phil Davis, a part he played in this production of White Christmas on tour, at the Dominion Theatre in London’s West End and at Curve, Leicester. He was nominated for an Olivier Award for his performance as Tulsa in Gypsy at the Savoy Theatre and his other West End credits include Jersey Boys, The Pajama Game, Chicago, Legally Blonde, Betty Blue Eyes and Guys and Dolls at the Royal Albert Hall.

Jessica Daley returns to the role of Betty Haynes, having previously toured with this production of White Christmas. Her additional theatre credits include the UK and Ireland tours of An Officer and a Gentleman and The Sound of Music, the international tours of Evita, Les Misérables and Grease The Musical and Mamma Mia! in the West End.

Monique Young reprises her role as Judy Haynes, a part she initially played in this production of White Christmas at Curve, Leicester. Most recently Monique appeared as Louise in the Buxton Opera House revival of Gypsy: A Musical Fable. Her further theatre credits include cover Winifred Banks and the title role in Mary Poppins in the West End, Penny Pingleton in the UK tour of Hairspray, alternate Dale in the UK tour of Top Hat, and Peggy Sawyer in 42nd Street and Kathy Seldon in Singin’ In The Rain both at the Theatre Du Chatelet.

A romantic comedy to warm hearts of all ages, WHITE CHRISTMAS features the beloved songs “Blue Skies”, “Sisters”, “I Love A Piano”, “Count Your Blessings (Instead of Sheep)” and the most famous festive song of all… “White Christmas”.

WHITE CHRISTMAS has Music and Lyrics by Irving Berlin and a Book by David Ives and Paul Blake. It is based on the original production by Curve Artistic Director Nikolai Foster (Annie, Breakfast at Tiffany’s). It is directed by Ian Talbot OBE (High Society, Anything Goes) and choreographed by two-time Olivier Award-winning choreographer Stephen Mear CBE (Mary Poppins, Gypsy). Set Design is by Michael Taylor and Costume Design is by Diego Pitarch. Musical Supervision is by Stephen Brooker, Lighting Design by Mark Henderson and Sound Design by Tom Marshall. Orchestrations are by Larry Blank with New Musical arrangements by Jason Carr.

Presented by special arrangement with Concord Theatricals Ltd. on behalf of R&H Theatricals.

Cirque du Soleil has announced the London run for one of its most critically acclaimed touring show KURIOS— Cabinet of Curiosities. Opening on 13th … END_OF_DOCUMENT_TOKEN_TO_BE_REPLACED

Ambassador Theatre Group Productions are delighted to announce a UK and Ireland Tour of the pantomime MOTHER GOOSE. The first of its kind to tour the … END_OF_DOCUMENT_TOKEN_TO_BE_REPLACED

The National Theatre’s new musical Hex returns to the Olivier theatre for Christmas, after its original 2021 opening was delayed due to covid. The … END_OF_DOCUMENT_TOKEN_TO_BE_REPLACED