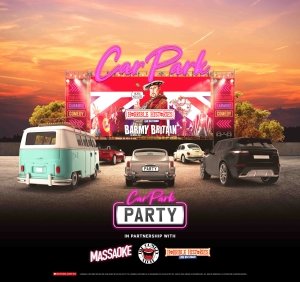 Birmingham Stage Company today announces that its production of Horrible Histories: Barmy Britain will tour car parks across the UK as the inaugural production in the Coalition Agency’s Car Park Party season. Audiences will drive in and enjoy the show from the comfort of their own car, with sound transmitted through each car’s radio. The production runs at Henley, Saturday 11 July 2020, with further dates to be announced.

Neal Foster, Actor/Manager of the Birmingham Stage Company said today, “We’re delighted to be taking part in this exciting, innovative and crazy venture. We’ve played the West End, Broadway and the Sydney Opera House so it’s brilliant to be able to bring our West End hit Horrible Histories – Barmy Britain back to a stage, albeit an unusual one – I’m sure we’ll never forget playing a car park. We’re excited to see what it will be like playing to an audience of cars, so let’s get those windscreen wipers waving, car horns blaring and emergency lights flashing. Britain has never been so barmy and Horrible Histories is revving up!”

Guy Robinson, CEO of Coalition Agency, commented, “We’ve been fans of Horrible Histories Live on Stage for a very long time and are thrilled to be working with Birmingham Stage Company on this unique tour. Whether you arrive in a Rolls Royce or an old banger, you’ll be in the fast lane for fun without moving an inch!”

Horrible Histories Live on Stage is based on the bestselling books written by Terry Deary, illustrated by Martin Brown and published by Scholastic. It first launched in 2005 with the world premieres of Terrible Tudors & Vile Victorians. Since then the Birmingham Stage Company has produced eighteen different Horrible shows, performing to over three million people in the UK, including the longest-running children’s show in West End history, with its record-breaking series Barmy Britain. Horrible Histories Live on Stage has also become a worldwide phenomenon, performing in Hong Kong, Singapore, Dubai, Qatar, Oman, Abu Dhabi, Bahrain, New Zealand and Australia, where it performed in the Concert Hall of the Sydney Opera House.

Horrible Histories – Barmy Britain is suitable for anyone aged 5 to 105 years. Please note 106-year-olds may not like it.