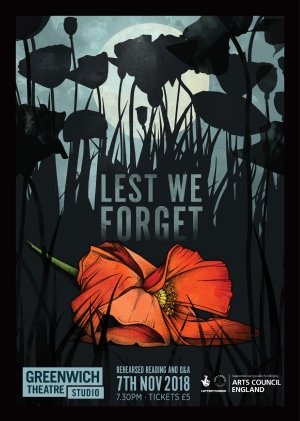 From pre-war Britain in 1914 to the race riots of 1919 we follow the lives of William James, a black British soldier and Edith Booth, a white Northerner new to London. When William and Edith fall in love during one of Britain’s most devastating periods in history they thought their hardest battle would be surviving the war, but fighting prejudice on the home front proves almost as challenging. This November, following a research and development process last year, Home Truths will be presenting the full length production of its brand new play, Lest We Forget, at Greenwich Theatre from 8th to 10th November 2019.

Charlotte Green, writer and producer of Lest We Forget, recently chatted with us about the production.

Where does the seed of Lest We Forget come from?
I wanted to write a classic World War One story with a twist. Something that was different from the norm. I began by looking at the home front as well as the front line. From here I became interested in the women’s side of events and as I researched the war I found out a lot about the West Indies regiment and men from the Caribbean joining the British army to fight. This peaked my interest and I started to research black British men who would have served in the war which led to me creating Lest We Forget.

How has the production evolved?
I wrote the first draft of the play and applied for funding from the Arts Council, which we were successful in securing. We had three days of a research and development process last November where we workshopped the script with actors and did a rehearsed reading in front of an audience. Using what I had discovered from the actors and the feedback from the audience I was able to redraft and eventually complete the script. This November we will be performing the full-length show for the first time on 8th, 9th and 10th November at Greenwich Theatre Studio with performances timed at 7.30pm and a matinee at 2.30pm on the 9th November.

What is at the heart of the production?
This play, at its core, is a World War One love story.

Can you tell us about William James and Edith Booth.
William James is a fictional character but built on many true stories. When researching I came across so many interesting lives and different facts that I wanted to include in the story. A lot of the military experience William has is based on events that happened in World War One. William is our hero of the story, he is a man with a strong moral compass and he is constantly bombarded with difficult situations. The racial issues are also taken from people I have spoken to who have experienced racial abuse. This has then been fictionalised and taken back in time to the sort of racial slurs used in early 20th Century.

Edith moves from the North to London where she meets William and falls madly in love. Her brother, Phillip, does not approve and she is torn between her family and the man she loves. Again Edith is fictionalised but based on real people and events and we look at how other people make her life with William difficult.

100 years on – how would you compare and contrast?
By taking more modern experiences of racism and comparing them to the past, I hope the audience will see that although a lot has improved, racist attacks are still far too frequent in our society and the consequences of hate are still felt today, just as they were 100 years ago.

I would also say in contrast to now it makes me think how lucky we are as a nation that we don’t have to go through what all those men and women did during the war. I’m thankful to them for doing their bit, big or small, to allow us to live our lives as we do today.

What challenges for creatives?
Transforming the studio into London in the early 20th century and war torn France and covering the whole period of the war will be a difficult task but one that we hope to achieve through the performances of our actors and symbolic use of props and set.

What do you want audiences to take away with them?
I would hope that audiences see that love will always triumph over hate and that they remember the men and women that paved the way for us today. I hope that they might learn something new about this time period as I never knew about the 1919 race riots prior to researching this play.

Mainly I want the audience to remember men like William James, black British soldiers who fought for this country, ready to make the ultimate sacrifice if needed, as I believe this is a part of history that has been forgotten about .

Can you tell us about the cast?
The full cast is in place and we will shortly be announcing the actors on social media. Please keep an eye on our Twitter page @HomeTTheatre, Instagram page @the_hometruths or you can like our Facebook page, Home Truths Theatre to keep up to date with the process.

Andrew Lloyd Webber’s The Phantom of the Opera has returned to its home, Her Majesty’s Theatre London. Experience the thrill of the West End’s most … END_OF_DOCUMENT_TOKEN_TO_BE_REPLACED

The full cast is announced today for the 40th Anniversary tour of Michael Frayn’s multi-award-winning farce, Noises Off, which will open at Theatre … END_OF_DOCUMENT_TOKEN_TO_BE_REPLACED

Adapted from Susan Hill’s classic book, The Woman in Black at the Fortune Theatre has been thrilling London audiences since 1989. In The Woman … END_OF_DOCUMENT_TOKEN_TO_BE_REPLACED

The producers of the multi-award-winning, critically acclaimed production of CABARET at the KIT KAT CLUB in London’s West End are thrilled to announce … END_OF_DOCUMENT_TOKEN_TO_BE_REPLACED