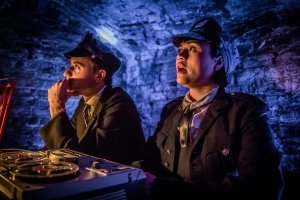 Unstuck Presents is putting together immersive club nights, where a dance music party includes an interactive walkthrough immersive element. The Heist is their first show, opening its doors for the first time on 4th October, into the early hours of Saturday morning. Visitors enter the King of Thieves club, where they’re invited to take part in a high stakes plot to prove their worth.

Further shows of The Heist will run from late November / early December and into 2020.

We caught up with the show’s creator, Leo Kesner, to hear about what motivated him to fuse these two entertainment genres.

Ben: How do immersive theatre and club nights fit together?
Leo: There are brands doing immersive club nights, like Elrow that involves lots of confetti, walkabout characters, dancers, which is great and looks amazing, they’re huge parties. We’re trying to do something different – take the storytelling devices found at immersive events, like Punchdrunk and Secret Cinema, and pair them with an incredible party.

What that looks like is two spaces: a dance floor with loud music, lighting etc., and then a separate space entirely for an immersive walkthrough experience. At some point in the night you’re taken away and go through this story and return back out into the club space.

Ben: What do people leave with that they wouldn’t if there wasn’t this immersive element?
Leo: It encourages them to interact with each other. The briefing invites participants to share what talents they have. It encourages people out of their shells. Taking part in something that could be described as a little bit nerve-wracking – not too much – gets the adrenaline flowing.

People experience a rush in the walkthrough, and that means they’re going to be in a mindset that really benefits the party, if that makes sense. A sense of relief. This prepares people to really get ready to party. They’ve done something quite scary and are ready to celebrate their win, or commiserate a loss. 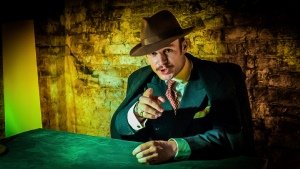 Ben: Is London particularly great for immersive theatre right now?
Leo: Yes. Definitely. Especially among the actors you meet, they talk about quite how many acting requests they get for immersive.

People are seeking out these sorts of experiences. We’re slightly alienated from each other on a daily basis, by technology. And in London, which is a bit of a workaholic city at the moment, people seek out the counter to that which is being playful and having fun. And there’s immersive theatre, which definitely allows people to do so.

Large events like Secret Cinema inform people that this entertainment option exists, whereas before they weren’t aware of it. So once you’ve been to one immersive event and seen how good it is, you might seek out other events. So I guess the answer is twofold: events that people do want to go to are happening, and there’s awareness that they exist.

Ben: So you combined the two?
Leo: I love music and love immersive theatre. I thought the two things will go well together.

The moment I thought I wished something like this existed was at Secret Cinema. I sat down to watch Star Wars, and I couldn’t help but feel I’d much rather be in a club right now. And I definitely felt like the same was probably true for a large portion of the people around me. You get extremely amped up, and you’ve gone through the highs, something adrenaline-fueled and come out feeling a little bit freer than you normally would, and you want to celebrate those emotions. Not to put Secret Cinema down, what they do is amazing, but I personally wanted to dance at that moment, go celebrate somewhere with loud music and I often feel that way going to these immersive events. I’m just desperate for things to break out into a party.

A club night is a little different to a party. You can be a bit more free. It’s dark. It’s smoky. There’s flashing lights. The whole idea of a club is that you lose yourself in it. Which in itself is immersive. Both those experiences have the same effect of allowing people to lose themselves and just have a great night. That’s what the vision of Unstuck Presents is.

Incorporating theatre in a club environment can also introduce immersive theatre to an audience who otherwise might not usually experience it (or might not consider theatre as something they’d find entertaining).

Dance music is where we’re it. It’s not Jazz or Blues, but we define ourselves by the stories we make. Then within that there’s a soundtrack with a whole range of dance genres.

Ben: How do you shift what people want from a night out?
Leo: In the marketing, setting expectations is really important. Also, people can ignore messages ahead of time, so briefing them on entrance to the venue about what they can expect is important. For example, when they can expect to be approached by the ‘guide’ to be taken to the immersive walkthrough.

Ben: The timing is interesting. Very much in a club night time-slot (starting at 11pm).
Leo: It is deliberate. We want people to have fun, let loose. That’s the hours that people do it. I went against it being a day rave – it’s a party and people expect that to be at night. We stand out as there aren’t other immersive or theatre options in London during those hours.

Ben: Sadly, we heard a bit recently about assaults on actors during immersive productions. Do you think this will be especially a problem in a club night context?
Leo: I don’t think the problems would be worse in a clubbing environment. In fact there’s a real force within underground culture and dance music of safe spaces and looking out for one another. I don’t think that’s as alive in your typical night out crowd. Drunk people are annoying wherever you find them, but I don’t think they’ll be any worse in a club environment, where we are specialists in keeping people safe from entrance to exit.

We definitely put safeguards in place, security in the venue. It’s an issue. You are up close with people in immersive, so people working have to know what they’re getting themselves into. But actors aren’t there just for people’s entertainment, and it’s sad that they’re treated that way. In the prebriefing we go through not touching the actors, paying the actors respect, and really drive this home.

Ben: Do you have a mission?
Leo: We’re trying to create a set of circumstances that really allow people to have a great time and to let go on a night out. Sometimes I think it’s not enough just to have a room full of people and play music. Sometimes I think it’s important to push people outside of their comfort zone in order for them to go through what could be perceived as a slight challenge and overcome it and go and enjoy a great party, effectively.

Ben: What’s next?
Leo: We’re going to run the Heist again, on several more occasions. We are smaller capacity, not a one-off huge event, but multiple shows for 150 to 350 people. From late November / Early December, then a few more in 2020.

Andrew Lloyd Webber’s The Phantom of the Opera has returned to its home, Her Majesty’s Theatre London. Experience the thrill of the West End’s most … END_OF_DOCUMENT_TOKEN_TO_BE_REPLACED

The full cast is announced today for the 40th Anniversary tour of Michael Frayn’s multi-award-winning farce, Noises Off, which will open at Theatre … END_OF_DOCUMENT_TOKEN_TO_BE_REPLACED

Adapted from Susan Hill’s classic book, The Woman in Black at the Fortune Theatre has been thrilling London audiences since 1989. In The Woman … END_OF_DOCUMENT_TOKEN_TO_BE_REPLACED

The producers of the multi-award-winning, critically acclaimed production of CABARET at the KIT KAT CLUB in London’s West End are thrilled to announce … END_OF_DOCUMENT_TOKEN_TO_BE_REPLACED