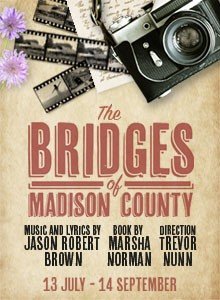 With Orpheus Descending opening at the theatre, and Fiddler on the Roof playing at the Playhouse Theatre, the Menier Chocolate Factory today announces that Jenna Russell will lead the company for the UK première of the musical of Robert James Waller’s bestselling novel The Bridges of Madison County in a new staging by Trevor Nunn. The production opens on 23 July, with previews from 13 July, and runs until 14 September. Public booking is now open.

Francesca is an Italian immigrant housewife living a happy existence on a farm in the American Midwest. However, when her family go off to the Iowa State Fair, she meets Robert Kincaid, a National Geographic photographer on assignment filming bridges in the area. Their initial friendship develops into a brief but passionate affair which has devastating consequences on all of their lives.

Winner of the Tony Awards for Best Original Score and Best Orchestrations, this is some of Jason Robert Brown’s most ravishing and unforgettable music.

The production sees Trevor Nunn renew his collaboration with the Menier – he previously directed Fiddler on the Roof (currently running at the Playhouse Theatre), Lettice and Lovage, Love in Idleness (also West End), A Little Night Music (also West End and Broadway) and Aspects of Love for the company.

Marsha Norman is a playwright and screenwriter. Her theatre credits include Master Butcher’s Singing Club; Third and Oak: The Laundromat; ‘night, Mother – Pulitzer Prize Winner for Drama­; The Secret Garden – Tony Award for Best Book of a Musical; The Red Shoes; The Color Purple; Getting Out; The Pool Hall; The Holdup; Traveler in the Dark; Sarah and Abraham; Loving Daniel Boone; Trudy Blue and Last Dance. Her television credits include In Treatment. For film ‘night, Mother; Face of a Stranger; A Cooler Climate; Custody of the Heart and The Audrey Hepburn Story.

Jason Robert Brown is a three-time Tony Award-winning composer and lyricist. His theatre credits include 13, The Last Five Years – which was also adapted into a film in 2015 starring Anna Kendrick, Parade – which won a Tony Award for Best Score, Honeymoon in Vegas, Songs for a New World and Urban Cowboy – which he co-wrote with Jeff Blumenkrantz.

From 1968 to 1986, Trevor Nunn was the youngest ever Artistic Director of the Royal Shakespeare Company, directing over thirty productions, including most of the Shakespeare canon, as well as Nicholas Nickleby and Les Misérables. From 1997 to 2003, he was Artistic Director of the National Theatre, where his productions included Troilus and Cressida, Oklahoma!, The Merchant of Venice, Summerfolk, My Fair Lady, A Streetcar Named Desire, Anything Goes and Love’s Labour’s Lost. He has directed the world premières of Tom Stoppard’s plays Arcadia, The Coast of Utopia and Rock n Roll; and of Cats, Sunset Boulevard, Starlight Express and Aspects of Love by Andrew Lloyd Webber. Other theatre includes Timon of Athens, Skellig (Young Vic); The Lady From The Sea (Almeida Theatre); Hamlet, Richard II, Inherit the Wind (The Old Vic), A Little Night Music (Menier Chocolate Factory, West End and Broadway), Cyrano de Bergerac, Kiss Me Kate (Chichester Festival Theatre); Heartbreak House, Flare Path, Rosencrantz and Guildenstern Are Dead, The Tempest (Theatre Royal, Haymarket); Scenes from a Marriage (Coventry & St James), All That Fall (Jermyn Street & New York); A Chorus of Disapproval and Relative Values (West End). Work for television includes Antony and Cleopatra, The Comedy of Errors, Macbeth, Three Sisters, Othello, The Merchant of Venice and King Lear, and on film, Hedda, Lady Jane and Twelfth Night.

This production is produced in association with Michael Harrison and David Ian.