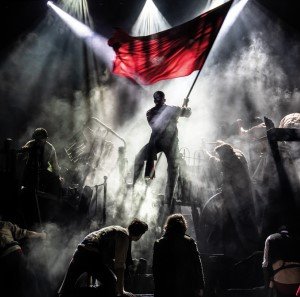 Joining the company from 27 September will be David Thaxton as Javert, Ava Brennan as Fantine, Robert Tripolino as Marius, Nathania Ong as Éponine and Lulu-Mae Pears as Cosette. They join Jon Robyns as Jean Valjean, Gerard Carey as Thénardier, Josefina Gabrielle as Madame Thénardier and Jordan Shaw as Enjolras.

David Thaxton returns to Les Misérables, having previously played both Javert and Enjolras at the Queen’s Theatre. His other West End credits include Kevin T/Garth in Come From Away at the Phoenix, The Phantom in The Phantom of the Opera at Her Majesty’s Theatre, Raoul in Love Never Dies at The Adelphi Theatre, Pilate in Jesus Christ Superstar at Regent’s Park Open Air Theatre and Giorgio in Passion at the Donmar Warehouse, for which he won the Olivier Award for Best Actor in a Musical.

Ava Brennan’s West End theatre credits include Angelica Schuyler in Hamilton at the Victoria Palace Theatre, Alline Bullock in Tina – The Tina Turner Musical at the Aldwych Theatre and Mrs Crachit in A Christmas Carol at the Old Vic. She has also appeared in Netflix’s Top Boy and her film credits include Hellboy, Rocketman, Mamma Mia! Here We Go Again and Beauty and the Beast.

Robert Tripolino’s theatre credits include The Man in Whistle Down The Wind at The Watermill Theatre, Jesus in Jesus Christ Superstar and Sal Russo in RAGS at Manchester Hope Mill Theatre. In Australia he has appeared as Jamie in The Last Five Years, Roger in Rent, Chino in West Side Story, Jean-Michel in La Cage Aux Folles, and Jamie in Third World Blues.

Nathania Ong, who most recently played Éponine in the UK and Ireland Tour, now joins the London production in the same role. She graduated from Mountview in 2021 and went on to make her professional debut in Be More Chill at the Shaftesbury Theatre that same year.

Les Misérables marks Lulu-Mae’s West End debut. She has recently been seen as Graziella in West Side Story at the Ljubljana Festival in Slovenia.

Since Cameron Mackintosh first conceived this acclaimed new production of LES MISÉRABLES in 2009, to celebrate the show’s 25th anniversary, it has taken the world by storm. It will relaunch its record-breaking tour of North America in October this year, a new tour of The Netherlands is set for early 2023 with further productions to be announced. The UK and Ireland tour continues its acclaimed run.

Boublil and Schönberg’s magnificent iconic score of LES MISÉRABLES includes the classic songs, I Dreamed a Dream, On My Own, Stars, Bring Him Home, Do You Hear the People Sing?, One Day More, Empty Chairs at Empty Tables, Master Of The House and many more. Several of its songs have become real-life anthems of revolution wherever in the world people are fighting for their freedom. Seen by over 120 million people worldwide in 52 countries and in 22 languages, LES MISÉRABLES is undisputedly one of the world’s most popular and contemporary musicals.

Cameron Mackintosh’s production of LES MISÉRABLES is written by Alain Boublil and Claude-Michel Schönberg and is based on the novel by Victor Hugo. It has music by Claude-Michel Schönberg, lyrics by Herbert Kretzmer and original French text by Alain Boublil and Jean-Marc Natel, additional material by James Fenton and adaptation by Trevor Nunn and John Caird. Orchestrations are by Stephen Metcalfe, Christopher Jahnke and Stephen Brooker with original orchestrations by John Cameron. The production is directed by James Powell and Laurence Connor, designed by Matt Kinley inspired by the paintings of Victor Hugo with costumes by Andreane Neofitou and Christine Rowland, lighting by Paule Constable, sound by Mick Potter, projections realised by Finn Ross & Fifty Nine Productions, musical staging by Geoffrey Garratt, and music supervision by Stephen Brooker and Alfonso Casado Trigo.

'Look anyone will tell you, I’m a pretty straight sort of guy.' Tony Blair A reckless reappraisal of the life of former Ugly Rumours front man and … END_OF_DOCUMENT_TOKEN_TO_BE_REPLACED

Michael Harrison and the Really Useful Group are thrilled to announce that The Wizard of Oz, the musical based on the iconic story by L. Frank Baum, … END_OF_DOCUMENT_TOKEN_TO_BE_REPLACED

Following major demand for tickets, the Queen of comedy Dawn French has announced a host of new UK tour dates for her critically acclaimed live … END_OF_DOCUMENT_TOKEN_TO_BE_REPLACED