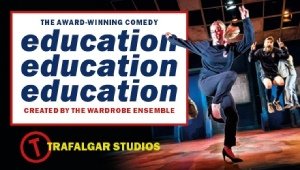 It’s May 1997. Tony Blair has won the election and Katrina and the Waves have won Eurovision. The iPhone doesn’t exist, no one knows who Harry Potter is and Titanic is on the shelves of every Blockbuster. Britain is the coolest place in the world.

Presented by The Wardrobe Ensemble, this whip-smart show is a love letter to education in the 90s and is jam-packed with more hits than ‘Now That’s What I Call 1997’ including Oasis, Katrina and the Waves, The Spice Girls. Crammed with Teletubbies references, jokes about Take That and the Macarena, Education Education Education is the new must-see comedy of 2019 and plays a strictly limited 4 week season at the Trafalgar Studios.

The Wardrobe Ensemble is a young company formed 8 years ago who devise work together as collective, the script wasn’t penned by a playwright but the whole company. Their work aims to force intellect and emotions to collide, exploring big issues and ideas of our time through intimate human stories. Education, Education, Education began at Edinburgh Fringe in 2017, a run in which they won The Scotsman Fringe First Award and The Stage Edinburgh Award, and has subsequently toured around the UK.

We asked Emily Greenslade from The Wardrobe Ensemble about the production.

Q: What is at the heart of the production?
Emily: I think behind all the great tunes, dancing and silly jokes, there is something quite tender at the heart of the show. I think it’s about care. It’s about how we care for each other – our colleagues, community and fellow citizens in difficult times. It’s about how we care for the next generation, what kind of values we want to instil in them and what kind of world do we want them to grow up in? I know that feels quite broad, but I think it’s all in there. These ideas seem particularly pertinent at the moment, in a country that is hugely divided and feels like it could do with a bit more kindness and care.

Q: How was the production created and how has it evolved?
Emily: Like all the company’s shows, the production was devised (i.e. we made it up) together in the rehearsal room. We started with an idea, this time “a show about a school” then generated a wealth of material by improvising or writing scenes. After lots of conversations and rearranging scraps of paper, we whittled down our material into a kind of structure and then finally a script.

However, as we’re all the writers and creators of this script, we are able to change the script as we go. We find we learn so much through performing the show and so will often tinker with scenes, transitions and movement sequences to try and make it better. The show is constantly evolving, which makes it such a fun show to perform.
I’m sure there’ll be some new bits added for this run too!

We started making this show in 2016 and finished it in 2017. We were making a show about the Labour Party in a time of party leadership contests, Corbynmania, a General Election and a referendum (!). While we moved away from making a show about party politics specifically, all the stuff that was happening at the time fed into the creation of the show and I think affected how the audience saw it in production.

For example, there is a scene in the show where the Head Teacher and Deputy Head are fighting over what to do about a difficult student. Does she deserve a second chance or should she be expelled for good? For us, this scene seemed to echo cross-party politics, both today and in 1997, as well as leadership contests and politicians
differing moral beliefs. I’m really interested to see if and/or how the show will be affected by the political context of today. Especially as it all feels quite literally on our doorstep.

Q: Why should everyone get along to see the show?
Emily: If you’re into politics or not, this show is for you. It’s a super-fast paced show, jam-packed with great nineties music and nostalgia. There’s a load of silly dancing and physical comedy. School chairs are chucked across the classroom and tables get jumped on. If you grew up in the nineties, this show is definitely for you. If you have a child who grew up in the nineties, then this show is also for you. As well as all the fun and silliness, there’s also something quite tender at the heart of the production. It may make you think about the past, encourage you to reflect on today and question what our future might look like. We hope you can get along to see it and hope to see you in the bar afterwards!

The National Theatre’s new musical Hex returns to the Olivier theatre for Christmas, after its original 2021 opening was delayed due to covid. The … END_OF_DOCUMENT_TOKEN_TO_BE_REPLACED

As it celebrates its 8th anniversary in the West End, The Play That Goes Wrong, the Olivier Award-winning smash hit announces an extension to the … END_OF_DOCUMENT_TOKEN_TO_BE_REPLACED

Producer Josh Andrews has today announced the lead cast for the UK tour of Peter James’ Wish You Were Dead: George Rainsford, will star as James’ … END_OF_DOCUMENT_TOKEN_TO_BE_REPLACED

MAMMA MIA! THE PARTY, London’s premier dining experience, is delighted to announce the new cast arriving at Nikos Taverna on the Greek island of … END_OF_DOCUMENT_TOKEN_TO_BE_REPLACED

Perform Productions is delighted to announce the cast and creative team for the West End premiere of Magical Merlin this October half-term. The … END_OF_DOCUMENT_TOKEN_TO_BE_REPLACED