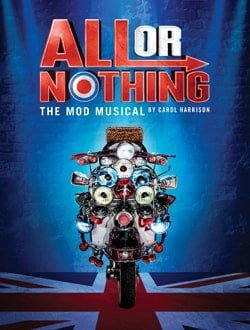 Following a third, critically acclaimed, sell-out tour, ALL OR NOTHING – THE MOD MUSICAL, based on the story of the Small Faces, will play a limited West End season at the Arts Theatre, London from 6th February to 11th March 2018, with a press night on Thursday 8th February. The producers of ALL OR NOTHING are also delighted to announce the release of a 29-track cast recording, as well as a limited edition 15-track blue vinyl LP, available from today, Tuesday 10 October 2017, from venues hosting the show on the current tour, as well as from the show website, www.allornothingmusical.com, and, when it is playing there, from the Arts Theatre.

Written and directed by the award-winning actress Carol Harrison, ALL OR NOTHING is the story of four charismatic young kids from East London with humour, attitude, passion and, above all, talent. They became the Small Faces and were rocketed into the big time, only to discover the path to success is paved with exploitation, betrayal and, ultimately, tragedy.

The cast at the Arts Theatre will be led by Carol Harrison as Kay Marriott and Chris Simmons as the older Steve Marriott. Further casting is to be announced.

In 1965, a new phenomenon erupted out of London’s East End. It was the essence of all that was cool. It was Mod. ALL OR NOTHING follows the rise and demise of the Small Faces, the band who encapsulated all that was Mod – a unique blend of taste and testosterone, clothes-obsessed and street-wise – but most of all, a dedication to rhythm ‘n’ blues. The musical celebrates the unique sound of this iconic Mod band, with all the Small Faces’ hits, including Whatcha Gonna Do About It, Tin Soldier, Lazy Sunday, Here Comes the Nice, Itchycoo Park and, of course, All or Nothing.

Carol Harrison said of the West End transfer, “I am honoured that ALL OR NOTHING has been embraced by so many wonderful audiences who have laughed, danced, wept and sang with us across the length and breadth of the country. I am so thrilled that we can now bring the ALL OR NOTHING experience to the West End. Watch out, ‘cos the Mods are coming ……Or maybe we just never went away!”

Carol Harrison is probably best known for her role as Louise Raymond in EastEnders. Other television roles include seven years as Gloria in Brushstrokes, Loretta opposite Ray Winstone in Get Back, and Dorothy in two series of London’s Burning. Carol’s theatre work includes Michael Rudman’s production of Arthur Miller’s Death of a Salesman at the National, Ripen Our Darknessat the Royal Court, Alan Parker’s production of Alfie at the Liverpool Playhouse and Lee Hall’s Cooking with Elvis at the Lyceum Theatre, Crewe. She was also a founder member of Half Moon Theatre in London’s East End. Her film credits include The Elephant Man, Quadrophenia and Human Traffic.

The show is endorsed and supported by many of those who feature in its story, including singer P.P. Arnold and Steve Marriott’s daughter, Mollie Marriott, who is the show’s vocal coach and creative consultant. 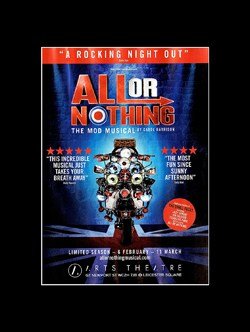 After creating the “absorbing and provocative” Version 2.0 and the “eminently lovable” Letters, Kashyap Raja returns to London with his new play Earth … END_OF_DOCUMENT_TOKEN_TO_BE_REPLACED