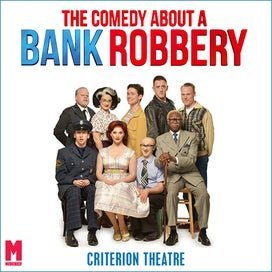 The critically acclaimed West End production of Mischief Theatre’s The Comedy About A Bank Robbery is set to play its final performance on Sunday 3rd May 2020 completing a successful four year run at the Criterion Theatre, and playing for over 2000 performances in London and on tour.

The Comedy About A Bank Robbery opened at the Criterion Theatre on 21 April 2016 and went on to be nominated for Best New Comedy at the 2017 Olivier Awards. Audiences will still be able to catch Mischief’s work across the UK with The Play That Goes Wrong playing at The Duchess, Magic Goes Wrong recently extending its run at the Vaudeville Theatre as part the Mischief residency, Peter Pan Goes Wrong currently on a UK tour and will be joined later this year on the road by Groan Ups. In addition, The Goes Wrong Show is currently airing on BBC 1.

Producer Kenny Wax said today “After a fabulous four year run at the Criterion Theatre, we have decided that now is the right time to draw an end to this incredible production. A four-year run is a remarkable achievement from which we all take much pride in. Mischief Theatre continue to have a magnificent presence in the West End and we hope audiences who enjoy The Comedy About A Bank Robbery will go on to see their other productions playing at venues across the UK”.