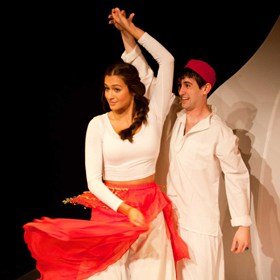 Everyone has heard the name Scheherazade, the unfortunate wife of a Persian king, Shahryar by name, who was aware of his duty to have a queen but so distrustful of women that he has them executed the morning after their wedding. Not necessarily the most appropriate story for children you might think but in the hands of Story Pocket Theatre and their production “Arabian Nights”, the tale of the wily and astute queen becomes a wonderful introduction to the magic of theatre.

On a plain stage decorated with a single minaret top, we find a man (Luke Pitman) asleep on a chair. As he wakes and notices the audience, we learn that he is the Storyteller and he is going to lead us through the story of Scheherazade (Yasmin Goodwin) and her tales, devised as a method of entertaining her husband (William Forde) and thereby prolonging her life. The three highly skilled actors bring each of the stories to life and what tales they are. ‘Ali Barba and the Forty Thieves’, ‘The Little Beggar’ and ‘Aladdin’ all performed splendidly and in their entirety for the enjoyment of the audience and the King himself.

“Arabian Nights” is one of those lovely pieces of theatre that is squarely aimed at children but will also keep the adults highly entertained. From the start, when the Storyteller woke up and Luke started to interact with the children sat on bean bags at the front of the seating area, it was pretty obvious that this show was going to be fun. As the last people arrived, Luke had managed – without actually speaking – to get the sprogs on his side and even a big hug from an initially reluctant adult. As the lights went down, the Storyteller became more ‘normal’ and introduced his fellow performers. Directors Julia Black and Adam Forde have made the very sensible decision to keep things simple. The actors where plain white Arabian style clothing, with only as hat, a cloak and sometimes just a change of face and posture mixed with the lively imagination of the audience to tell the various stories. I’ve never seen three actors perform as so many different thieves in a way that to everyone watching, each one was an individual character in their own right. The minaret set (by Francine Huin-Wah) is used very effectively, transforming into the cave of wonders, a front door and even a fishing boat. The best bit is, and believe me this is difficult to say, the children. They are so obviously totally absorbed in what is happening. At one point, in the show I saw, when the slave was in front of the judge accused of killing the Little Beggar a voice from the bean bags piped up ‘Tell him who really killed him’ and at least one of the little ankle biters got very excited when Aladdin started, happily telling the rest of the audience ‘this is my favourite story’.

Presented as part of the ‘Alchemy’ season at the South Bank Centre, “Arabian Nights” is a wonderful way to keep adults entertained and children completely enthralled for an hour or so. A wonderful theatrical presentation.

Arabian Nights
Classic tales retold with music and puppetry.
Meet Sheherazade, the greatest storyteller of them all. She has a feast of adventures and fantasies to tell involving genies, villains, heroes and princesses.

Enjoy Ali Baba’s encounter with the 40 Thieves, then watch Aladdin find his lamp. Meet the Little Beggar and see the Fisherman encounter the Genie. Let Story Pocket Theatre transport you to a wonderful world of mysterious marvels using puppetry, music and theatrical magic, in this new adaptation.
Winner of the Primary Times Children’s Choice Award 2014

The comedy value in this episode of The Seth Concert Series was off the scale. Christine Pedi has done several productions of the Forbidden Broadway … END_OF_DOCUMENT_TOKEN_TO_BE_REPLACED

The album for this show, I Could Use A Drink, was released in 2013 but there were nonetheless moments when it felt very much like the show was written … END_OF_DOCUMENT_TOKEN_TO_BE_REPLACED

It’s easy enough to get immersed into a production like this. Even in its concert format, there’s something compelling about the way in which the … END_OF_DOCUMENT_TOKEN_TO_BE_REPLACED

I wouldn’t exactly say Ben Forster appearing as himself in this musical comedy is a career highlight (he is, after all, someone who has played the … END_OF_DOCUMENT_TOKEN_TO_BE_REPLACED

It’s an intricate plot, laced with some subversive humour - that the female character is simply called ‘The Woman’ (Molly Lynch), for instance, is … END_OF_DOCUMENT_TOKEN_TO_BE_REPLACED