You are here: Home / Reviews / Musical / Parade by The National Youth Music Theatre at The Other Palace 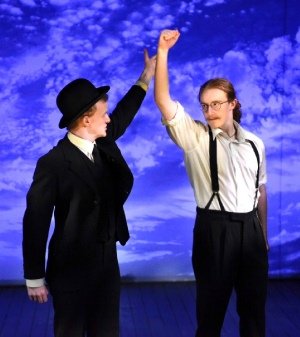 The National Youth Music Theatre have been training and inspiring young people in that discipline for over forty years. Their alumni include Idris Elba, Kerry Ellis, Michael Jibson and Jasper Britton. These are big boots to fill but the class of 2019 are doing them proud as they showcase their talents in Parade at The Other Palace.

First performed on Broadway in 1998, the music and lyrics are by Jason Robert Brown (who’s Bridges of Madison County is currently running at the Menier) with a book by Alfred Uhry (Driving Miss Daisy). Although it won two Tony’s, it wasn’t a commercial success and was revised for the London revival at the Donmar in 2007 and this is the version that the NYMT are playing for just six performances as part of their annual residency at Andrew Lloyd Webber’s theatre in Victoria.

Parade dramatizes the true story of Leo Frank, a Jewish factory manager in Marietta, Georgia in 1913 who was falsely accused of raping and killing Mary Phagan a thirteen-year-old girl who worked in Frank’s factory. The story touches on anti-Semitism, racism, the American criminal justice system and the values of the deep south not that long after the Civil War and the abolition of slavery. It’s a story of hope and love and works on many levels. So, it’s a very brave and worthy project for a group of actors and musicians to take on and it’s hard to realise that the ages of the performers you see onstage and you hear in the orchestra range between 14 and 22!

The show starts with a civil war veteran soldier on stage and he’s soon joined by a young soldier and the rest of the cast enter the stage from the wings and the stairs in the auditorium to give a stirring rendition of the opening song “The Old Red Hills Of Home” and the audience is almost on their feet from the start. Brown has written some superb songs (there are 22 listed in the programme) in various styles with not only some sublime love songs and ballads but ragtime, Dixieland, spirituals and foot-stomping songs for the cast to dance superbly to (take a bow Matt Cole who did the choreography).

Splendidly directed by Hannah Chissick whose superb production of Amour was recently enthralling audiences at the Charing Cross Theatre, guides her young performers with a steady, subtle hand. Diego Pitarch’s set design of a back-drop of clouds which change colour to match the mood of the story, a couple of sliding screens and some wooden boxes that become various props such as a coffin, a politician’s soapbox and a prison bed is simple but perfectly formed.

The performances are all superb with not a weak link amongst them. Matt Pettifor is perfect as the somewhat arrogant, controlling Leo Frank and there’s excellent chemistry especially in their duets between him and Lucy Carter who plays his supportive wife Lucille. There are also wonderful cameos from Samuelle Durojaiye as Angela who opens act two with a bang, soloing on the gospel-tinged “A Rumblin’ and a Rollin” and Iyinoluwa Michael Akintoye as Jim Conley who as an escapee from the chain gang is blackmailed into giving false testimony at Frank’s trial. Zoe Troy is excellent as Mary Phagan the murdered girl who Chissick keeps on stage after the murder to observe what’s happening after her death. And whilst I’ve picked out these performers for praise, the rest of the cast are all excellent too. And it was a delight to hear a ten-piece band giving great depth to Brown’s marvellous melodies.

Parade is a multi-layered piece of theatre and not the easiest musical to stage – even the late, great Hal Prince had difficulties with it back in 1998 so Jeremy Walker the Artistic Director of NYMT deserves all the praise in the world for allowing his very young company to give it their all. His timing couldn’t have been more perfect with its references to anti-Semitism, racism, the feeling of alienation and even fake news!

At the beginning of this review, I listed some of the famous actors who had trained with NYMT and I’m sure in years to come, some of the current group will be joining them on that list. If this is the standard and quality of young performers in 2019, the future of musical theatre in the UK is in safe hands.

Amid religious intolerance, political injustice and racial tension, the stirring Tony Award-winning PARADE explores the endurance of love and hope against all the odds. With a book by acclaimed playwright Alfred Uhry (Driving Miss Daisy) and a rousing, colourful and haunting score by Jason Robert Brown (Songs For a New World, The Last Five Years, Bridges of Madison County), Parade is a moving examination of the darkest corners of America’s history.

PARADE
Performances at The Other Palace, London. 7-10 August 2019
https://nymt.org.uk