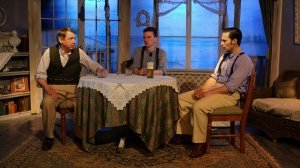 Eugene O’Neill’s epic play, Long Day’s Journey Into Night, is considered one of the all-time great classics of the 20th Century. Echoing Greek tragedy, it is a vicious, unrelenting family drama devoid of grace or forgiveness, in which each of its members – through what they perceive to be an insurmountable circumstance – wallows in self-pity, self-hatred and a need to destroy one another.

It is also a vivid depiction of O’Neill’s own experience growing up inside a family headed by a thespian patriarch and, because of its damning biographical content, he forbid it to be published during his own lifetime. Following his death in 1953, it was first performed in Sweden in 1956 and then on Broadway during the same year, earning huge accolades and a Tony Award for Best Broadway Play of 1956.

So, how does this vicious, three-hour long whining commentary of family interactions stand up after nearly 65 years? Under harsh scrutiny, probably not very well, partly because of its creaking structure, but mostly because it requires a surgical examination of character study that may well be beyond the scope of many actors.

Long Day’s Journey into Night is played out during a single day in the life of the Tyrone family in a seaside Connecticut town in the summer of 1912. The family patriarch, James Tyrone (Francis Abbott), is a highly successful stage actor who has forged a long-term career playing the Count of Monte Cristo, married to Mary Tyrone (Dorothy Duffy), his morphine-addicted wife, who is wrapped in a shroud of bitter memories and recriminations, most of which are levied at her husband James.

Their elder son, Jamie (Luciano Dodero), is a failed actor who enjoys a drink and the ‘company of whores’, while their younger son, Edmund (George Abbott), has recently been diagnosed with consumption, a condition which has cut short his sea-faring venture and forced him back to the family’s summer home. Both brothers share their mother’s disdain for their father, which concerns a deep resentment of the patriarch’s penny pinching approach to money.

The discourse of James Tyrone’s miserliness is a repetitive commentary spoken by each of the characters in every scene of the play which, in the case of Jamie, aged 34, and Edmund, aged 24, raises questions about why they continue to rely on pocket money from ‘the old man’ whom they both despise. We learn of a middle brother, Eugene, who contracted measles and died before Edmund was born.

Mother Mary blames her son Jamie – and her husband James – for Eugene’s death. In the play, she returns again and again to her decision, many years ago, to leave her sons in her mother’s care and to join James Tyrone on the road, travelling from city to city, rather than to remain at home and care for baby Eugene and Jamie who, at the time, is ill with a severe case of measles. While she is gone, and even though Jamie has been warned not to enter his brother’s room, he does so. Little Eugene is infected with measles and succumbs to the ravages of the disease.

To return to the creaking structure of the play, it relies solely on dialogue to further the action of the piece. We are shown little but told everything in a progression of chatty scenes whereby a third character finds an excuse to leave the stage, so that the two remaining characters can reveal what they think about the character who’s just left. Anytime there were three characters present, I found myself waiting for the plot device that would allow the third character to exit.

So, for three hours we listen to each family member deride, degrade and demonize James Tyrone for his niggardly approach to money; he buys second-hand cars; considers electric lights a luxury; shops around for cheap medical care and has opted for a menial cottage when he could afford an opulent summer home for his family. But when we hear mother Mary’s sneering tone as she describes Tyrone’s tragic childhood, we feel compassion for this tight-wad patriarch and little sympathy for Mary and her lay-about sons, although Edmund is the more promising of the two, having returned home only because of illness.

Rather than having compassion, Mary practically sneers when she tells of her husband’s deprived childhood. We learn that James Tyrone was ten-years-old when his father deserted the family and travelled back to Ireland, leaving his mother penniless and with a brood of children to raise on her own.

As the eldest child, James was forced to leave school and work twelve-hour shifts at starvation wages to help his mother feed and clothe his younger siblings. He never forgot the pangs of hunger, nor that the family was always one step from the poorhouse. In comparison, Mary enjoyed a privileged childhood and never wanted for the finer things in life.

Although we wince at the verbal attacks she levies at Tyrone and her son Jamie, we can also empathise with her morphine-fuelled rages as a defence against the unbearable guilt she feels at leaving little Eugene alone to die. Add to this the rivers of whisky imbibed by James Tyrone and his two sons throughout the play and you’ll get an idea of the verbal attacks unleashed by copious amounts of John Barleycorn.

Although the piece is billed as an amateur production, I still wondered if some of the never-ending complaints could be pared back and a few scenes shortened, as the play is literally buried in dialogue, but Director Simon Bartlett may not have wished to tamper with O’Neill’s words.

Finally, the Tyrone family, as well as the audience, is trapped on a merry-go-round, one in which garishly painted wooden horses continue to bob up and down and the music plays on. It’s a tough ride.

Telling of one family and its self-discovery over the course of a long August day in 1912, when James Tyrone, a hugely successful immigrant Irish actor has retreated with his wife and two sons to their Connecticut seaside home.