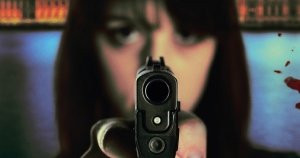 The newly formed Crime and Comedy Theatre Company have just opened a two month 17 venue small/medium scale tour of Robin Hawdon’s two-handed whodunnit Revenge. I saw the production at Greenwich Theatre. Walking to the theatre up Crooms Hill I did wonder if I had come to the wrong theatre, as although there was advertising for every other event coming to Greenwich, one searched in vain for a poster for Revenge!

Robin Hawdon sets his 1991 play in the lavish London apartment, overlooking the Thames, of MP Bill Crayshaw, very challenging for this type of tour which is visiting so many venues on a limited budget, but the set, by Snugglebean Ltd, was everything it should be, as well as being very well dressed by Alexandra Bradford, with great attention to detail. Even a bottle of Jameson’s whisky!

Bill Crayshaw MP leads a charmed life as successful MP, businessman and husband until he returns from a business trip to discover that his political agent has died in an accident and a supposed reporter, Mary Stewart knocking at his door – but how does she know so much about his private life?

The actor who was originally playing the MP had to leave the cast just before the first two performances at Greenwich, which were cancelled, but, instead of using his understudy, listed in the programme as Toby Trimby, who presumably knew the script, the producer, Martin Parsons, decided to cast Nigel Fairs, who did not! Mr Fairs is clearly a very competent actor but was asked to do almost the impossible as he is onstage virtually for the whole 120 minutes of the play and had only been able to learn about 5% of it. Here he impressed, but for much of the time, especially in act one, it was like watching a play reading. Some members of the audience were commenting in the interval that they found his use of the script spoilt their enjoyment of what is anyway rather a ‘wordy’ play.

The role of the ‘reporter’ Mary Stewart was in the hands of Kate Ashmead. In Act One she tells the audience that she is from Aberdeen, but unfortunately, her accent was not! It must have been very difficult for her to act with someone who is reading his lines from a script and she did her best, but only really began to convince during the course of the second half when both actors had begun to relax a bit.

This play needs a great deal of light and shade and the director needs to know when to push it on and build to one of the many climaxes, and when to relax the pace. Unfortunately and not surprisingly, this rarely happened even though I am sure that Louise Jameson had used her rehearsals well. The play proceeded at a constant pace with little variety.

This company has obviously had problems with this production, many, if not all, of which may well be ironed out during the course of the tour. I do hope so!

Bill Crayshaw MP leads a charmed life, hailed in the corridors of Parliament, lauded in business, and loved at home. That is until he returns from a business trip to find his party agent has been killed in a terrible, tragic accident – or was it?

Mary Stewart isn’t so sure and arrives at his door asking some awkward questions – in reality, is his success founded on murder, corruption and double-dealing?

But how does she know so much about his private life – a jealous journalist peddling seedy lies? This one seems prepared to go to extraordinary lengths to ensure his political, business and personal lives are ruined. Is her motive journalism, blackmail, seduction… or revenge?

As the tension mounts and suspense increases, shots ring out and the initial game of cat and mouse turns into a deadly battle, twisting and turning between truth and lies, to reach a thrilling climax that will keep audiences guessing until the final curtain!