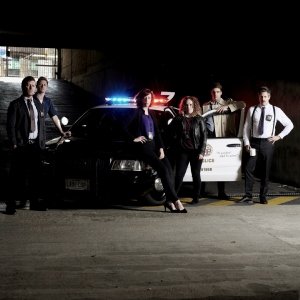 Let me confess something: this was my first improvised show because as an amateur actor I know how difficult it is to make up things to say when on a stage in front of tens of people and I often feel personally bad for actors forgetting their lines during scripted shows.

The Free Association is a London-based improvised comedy theatre and school (they even have a Wikipedia page!) that offers training programmes for aspiring improv actors and it is currently offering a wide range of shows at the Vault Festival in London. The one I attended is called The Badge: An improvised Cop Show, starring Graham Dickson (not at the performance I saw), Alison Thea-Skot, Naomi Petersen, Shaun Lowthian, Chris Gau, Ian Thomas Day, Freya Slipper and Vic Barry.

At the start of the show, one of the actors chats with a member of the audience about hobbies, work, passions, and the cast uses the information gathered to build a spoof cop show: at the performance I attended they got “property lawyer”, “yoga classes”, “tennis”, “Roger Federer” and “Rafael Nadal”.

The result was a hilarious hour-long story about the murder of Martina Navratilova by Roger Federer and Rafael Nadal being investigated by a very stressed captain and a bunch of misfit cops with Abraham Lincoln as a special guest. As you can imagine the plot line was not very linear and there were gaps wide enough to fit the Grand Canyon in, but that’s not the point of an improv show, that’s part of the charm.

I was mesmerised by the performance; the audience were in stitches and the cast managed to build sketch after sketch more or less linked together in a story and the actors were hysterically funny. Some parts clearly worked better than others and there were a handful of moments where the actors had tiny struggles to proceed, but all in all the performance was hilariously surreal and kept the audience thoroughly entertained.

This show is all about pure and simple belly laughs, nothing complicated and cerebral, and I say this in a very positive way: I spent an hour just laughing, without having to worry about understanding the jokes or the plotline, but just enjoying the show. In particular, I was really awestruck by the actors, as they managed to create characters and lines on the spot, without even having to consult each other at the beginning and they kept the energy up for a whole hour using just some chairs and a desk, showing that theatre does not need much in term of props to entertain. A special mention to Alison Thea-Skot who during the show managed to switch from gossipy cop, to shy therapist, to property lawyer, to Roger Federer and she was side-splitting in all of them.

If you are looking for an hour of unadulterated fun and you are fine with slightly surreal plotlines, I strongly suggest you book yourself an improv show at the Vault Festival and the Free Association is currently offering a whole array of performances over the next few weeks, including some more chances to see The Badge – An improvised Cop Show.

Ride along with the brave police officers behind The Badge. No rookies here – just seasoned vets, one day away from retirement, protecting the innocent and serving up hot, hilarious justice. On the beat and completely off the cuff.