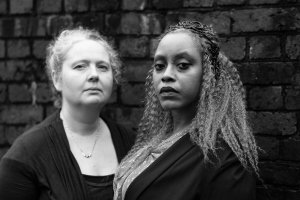 Social media can be a great force for good. It enables people to keep in touch easily, even if separated by thousands of miles. One of my favourite things to do is to join the Sunday morning Tweetalong where hundreds of us join together to discuss the latest goings-on in Ambridge (Emmerdale). However, there is a problem with social media which is often overlooked. It’s permanence. Whatever you post is pretty much out there forever. Even deleting a post is not guaranteed to get rid of it, or stopping it coming back to bite you. This is explored in-depth in Dameon Garnett’s one-act play Sticks & Stones at the Tristan Bates Theatre.

The story takes place in a school where two very different women are great friends. Afua (Eva Fontaine) is a well educated mixed-race woman about to be promoted to Head of the school. Tina (Catherine Harvey) is a white working-class woman, relocated from Merseyside to London, who pretty much runs the school kitchen. The two women have known each other for years – their children used to be friends – and often go out together on nights out. However, today Afua is talking to Tina in her official capacity. Someone has given the school management screenshots from Tina’s Facebook page which shows that she has liked and shared various posts of an offensive nature. While Tina laughs them off as just jokes, Afua is highly shocked and worried about the effect of these posts, not just on the reputation of the school but also as an indication of the real personality of her ‘friend’.

Oh boy, where to start with Sticks & Stones. Let’s go with the writing. I can honestly say that I have never moved so often between supporting different characters in a play as I did with this one. Both Afua and Tina had points with which I agreed and disagreed. The writing is really excellent in that way, presenting both sides of the women’s arguments without fear or favour, and demonstrating the two worlds which society, and especially social media are now in. The first, politically correct – in a good way – treating everyone with respect and being aware of cultural sensitivities. The other, being the good old fashioned world where jokes – whatever their subject matter – are just jokes and laughing at one does not necessarily mean you agree with their sentiments and ‘well, it’s all just a bit of banter, ‘get a sense of humour snowflake’, is the answer to everything. What is interesting is that, in this case, the majority of the offensive posts are from friends of Tina and, in her mind, liking them is more about liking the person than the post. Whether she is being naive or not is another question. I could go on for days about the politics of Sticks & Stones but will leave it there and let you make up your own mind when you go and see it.

The power of this play comes not just from the writing but also from some truly superb acting by Fontaine and Harvey, whose characters are so rounded and perfectly believable in every aspect. Over the course of the 55 minute run, the two actors give everything they have to their roles. I was totally transfixed by both, from the gentle introduction to the two and the confusion over who was getting promoted through to the very intense moments as the story builds to its emotional conclusion.

Raheka Christie-Carter’s direction is deft and very naturalistic, really making it feel as we are eavesdropping on the conversations between Tina and Afua. As a union activist, I have to say that both the conversations were slightly iffy from an employment legislation point of view but I’m not going to dwell on that. What I will say is that the play is an intense, no holds barred piece of theatre that is guaranteed to cause long lasting conversations among audience members for hours afterwards.

There’s the old expression: sticks and stones may break my bones, but names can never hurt me – but what are the limitations on that in today’s society? Sticks and Stones is a new play by Royal Court Studio Group writer Dameon Garnett exploring issues around free speech through the prism of race and class.

Afua, a black senior manager in a secondary school, is asked to investigate online comments by a white colleague, Tina; a woman she thought was a friend. Do Tina’s comments constitute hate speech, and, if so, should the police get involved? Afua has always fought for women’s rights, and Tina is a wronged woman, but with an axe to grind that even Afua is not prepared for. In an intensely claustrophobic setting, the clash between the two women becomes increasingly explosive; opening up questions around speech, power, race and class, that perhaps modern Britain is not ready to answer.