You are here: Home / Reviews / Play / Thread by Freya Alderson at the Hope Theatre | Review 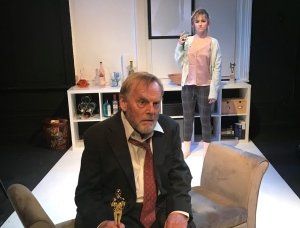 Playwright Freya Alderson’s Thread is a challenging play. Under the guidance of director Veronica Quilligan it presents the audience with a dilemma concerning allegations of rape against an aged family member and whether it is ever justified to shield a loved one from prosecution for a past crime.

Vivian (Christina Balmer) and Margo (Maya-Nika Bewley) are two half sisters who share the same father, Peter Gibson (Eric Carte), a once famous actor who now suffers with late-stage Alzheimer’s disease and acute memory loss. He does not recognise his own daughters, has violent mood swings, and is incapable of caring for himself. He is also being accused of having committed sex crimes against an actress who worked with him in the distant past.

Vivian, now a successful actor herself and with a career on the upswing, is the daughter from Peter’s first marriage. Although her father has been thoughtlessly unkind to her throughout her childhood and into her adult years, maligning what he considers to be her lack of good looks, she is steadfastly loyal to him. Vivian views the allegations against her father to be nothing more than a minor actress’s attempt to use publicity to boost her career. If a male is sexually aggressive, just say ‘no’ is Vivian’s attitude, while her younger sister, Margo, the child from Peter’s disastrous second marriage, thinks otherwise.

It’s not only that Margo is a child influenced by the #MeToo Movement, nor that she wishes solely to empower women who’ve survived the devastating humiliation of sexual assault, she also resents Peter for having – metaphorically – kicked her to the curb when her parents’ fractious marriage inevitably broke down. She approaches the rape allegations against her father as an impartial observer, keen to listen to his accuser in a bid to uncover the truth.

Mashed up in this mix of family tensions is career guru Ian Semenya (Christopher Jenner-Cole), a staunch supporter of Vivian who encourages her to manage the damage limitation to her own career when the accusations against her father go nationwide.

Ian is a sophisticated middle-aged male who brushes off his own history of sex with budding actresses as, not coercion in return for an acting part, but as their desire to have sex with him as a virile, handsome male.

As for Peter, he is never made aware of the historical rape charges that have shredded the worn fabric of family loyalties between Vivian and Margo. Alzheimer’s has already debilitated his brain function to the point where he is unsure of who he is and would be unable to comprehend the allegations if he were made to answer them in a court of law. Instead, he stumbles on and off set looking for cigarettes and demanding to be fed, while Ian, as the younger, better looking example of a predator – breezes in and out as a peripheral character in the lives of Vivian and Margo.

A throbbing sound track (sound design Matthew Karmios) should infuse energy into the play but, other than watching young Margo revel in her dance moves, it serves only as a welcome respite from the somewhat repetitious and expected dialogue voiced by the millennial Margo, as opposed to Vivian’s protective response to her father’s alleged sex crime, somehow making it difficult to engage with the dilemma faced by either sister.

I found this inability to engage both puzzling and disconcerting as Thread is a well written, well acted play, one that thrashes through the topical issue of men in powerful positions preying on young women for sexual favours in return for career advancement. Although its focus is the entertainment industry, we are well aware this despicable and criminal behaviour is present in all aspects of business and family life.

But at an hour and forty minutes Thread is overly long and would, perhaps, regain its mojo if it were to cut some of the continual squabbling between the sisters and present itself as a one-act play.

Vivian is on the verge of a career defining achievement when a shattering sexual allegation about her famous father, Peter, now suffering with Alzheimer’s disease, threatens to be revealed. Her social media conscious younger sister Margo, is desperate for the truth but as family secrets slowly begin to reveal themselves, Vivian finds herself caught between loyalty to her family and the new world of #metoo; a world she should be a part of.

As the pressure grows around the family, the threads that bind them begin to tear and pushes the sisters to confront the question – is protecting family more important than the truth?

THREAD is a female driven play about loyalty, mental health, social media in the age of the #MeToo movement, family ties and the collateral damage of abuse and allegations.