The National Theatre’s new musical Hex returns to the Olivier theatre for Christmas, after its original 2021 opening was delayed due to covid. The full company performing in this new production is announced today before starting rehearsals at the NT on Monday 3 October. 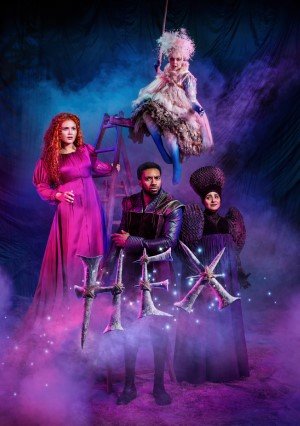 A vividly original retelling of Sleeping Beauty, Hex is a mythic, big-hearted musical that goes beyond the waking kiss. When the fairy is summoned to the palace to help the princess sleep, her spell becomes a curse, and she is plunged into a hundred-year quest to make everything right.

Performances of Hex start on 26 November with press night on 6 December and a final performance on 14 January.

'Look anyone will tell you, I’m a pretty straight sort of guy.' Tony Blair A reckless reappraisal of the life of former Ugly Rumours front man and … END_OF_DOCUMENT_TOKEN_TO_BE_REPLACED

Michael Harrison and the Really Useful Group are thrilled to announce that The Wizard of Oz, the musical based on the iconic story by L. Frank Baum, … END_OF_DOCUMENT_TOKEN_TO_BE_REPLACED

Following major demand for tickets, the Queen of comedy Dawn French has announced a host of new UK tour dates for her critically acclaimed live … END_OF_DOCUMENT_TOKEN_TO_BE_REPLACED