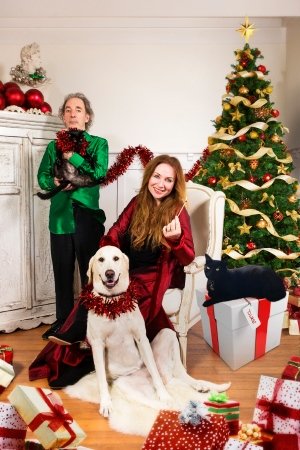 A few years ago, singer songwriter Judith Owen and husband Harry Shearer (of Spinal Tap and The Simpsons fame) opened their Santa Monica home for an annual gathering at Christmas for family and friends where music would be played, songs sung, and jokes told, and the evenings grew into heart-warming house parties. Then in 2005, the couple decided that they would move them out of their home and turn the occasions into fundraising events for charities and people in need. The first one was in aid of the victims of Hurricane Katrina as Shearer and Owen had fallen in love with the city and moved there.

Last year they came to London putting on a show at the Mayfair Hotel and raise money for the West London Mission. This year the charity remained the same, but the venue changed to the Chartwell Suite in the luxurious Hyatt Regency Hotel in Portman Square.

Like last year, there was a smorgasbord of acts with Owen acting as a very funny Master of Ceremonies, having the audience in the palm of her hand and cajoling them into doing her will – including that of the guest of honour (see below for more about her powers of persuasion!) The evening got off to a bit of a downer with the announcement that due to illness, Rick Wakeman wouldn’t be playing, and Miss Hope Springs wouldn’t be appearing due to a family bereavement.

Then after a song from Owen, Harry Shearer failed to lift the mood with a song about what the Kurd’s were getting for Christmas and the Iraqi crisis! He was followed by a very unfunny Father Christmas who’s jokes dropped like overbaked mince pies.

However, with the arrival of singer songwriter Graham Gouldman (he of 10cc etc) singing “Bus Stop” a song he wrote for The Hollies in the sixties and one of 10cc’s hits, “The Things We Do For Love”, the mood of the audience as they sangalong, was lifted.

He was followed by Harry Enfield who whilst his old fashioned, off-colour sketch about a father’s speech at a same sex wedding raised only a titter, he resurrected his “Loadsofmoney” character after thirty years living in the Middle East and that went down a storm.

Simon Evans who’s better known as a theatre director, wowed the audience with some close-up magic and then the superb Show Strings played a couple of medleys of songs you wouldn’t associate with a string quartet. They were followed by fake psychic Clinton Baptiste, who depending on your taste, makes you laugh until you cry or if his schtick isn’t to your taste, just cry! One of the highlights of the evening was Woman To Woman, a “supergroup” made up of Julia Fordham, Beverly Craven and Judie Tzuke who unfortunately sung just two songs when if Clinton Baptiste had cut short his ramblings, they could have sung at least one more.

Then after a raffle and an auction, Shearer and Owen sang one of Spinal Tap’s best (only?) festive song “Christmas With The Devil” although they didn’t turn it up to eleven!

The evening ended with a Christmas singalong that culminated in a raucous, “The Twelve Days Of Christmas” complete with actions from the audience; the persuasive Miss Owen even had a real-life Lord “a leaping” – best he remains nameless to spare his blushes!

So once again a fun night out that raised over £10000 for the West London Mission. If you want to see Judith Owen, Harry Shearer and friends this year, then you’ll have to go to New Orleans so it might be better to wait for 2020 and hope they’re back for more Christmas fun and fundraising.

All proceeds go to charity – The West London Mission.