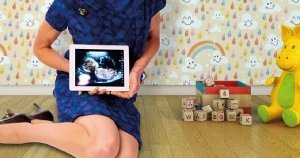 It’s a heartrending story in many ways but I just couldn’t completely shake off the thought in my head that this is a narrative of First World Problems. Nellie (Rachael Bellis) takes on the role of surrogate mother to Catherine’s (Kat-Anne Rogers) child. That is, assuming all goes well – I trust it is not too much of a spoiler to state that not absolutely everything runs like clockwork, if only because if it did, e-baby would have been a very short play indeed. Nellie takes to vlogging about her experiences, allowing the production to make good use of video projections on several occasions.

The play is steadily paced, meaning that Catherine isn’t the only one who must exercise patience with regard to her becoming a mother. To be a parent is, of course, a wonderful thing, and despite my opening gambit about ‘first world problems’, one would nonetheless have a heart of stone not to be moved at least to some extent with regards to Catherine wanting to have a child but not being able to. And ultimately, the lengths to which she goes to, alongside a successful legal career and busy life outside work, is indicative of the sheer longing and determination that exists in those who very much believe that going down the route of surrogacy will help them achieve what they desire.

She has already gone through the IVF route. The whole thing is not, as the production plainly and repeatedly points out, a walk in the park: there are all sorts of issues to be worked out. Under what circumstances exactly will money be paid out by Catherine and her husband Harry to Nellie and her husband Mike? What happens if the surrogate mother is injured in some way? The play asserts that surrogacy is not legal in the United Kingdom, which is why Catherine has flown over to the United States to have it done there. It’s not clear exactly when the play was set, but Nellie’s vlogging sets it in the digital era (YouTube was founded in 2005). But the Surrogacy Arrangements Act received Royal Assent on 16 July 1985.

Anyway, alarm bells ring whenever Nellie’s religious beliefs seek to override Catherine’s wishes – on the other hand, her faith also seems to ensure that her motives are about helping someone else by giving them a fighting chance rather more than it is about cash in the bank. I found Catherine rather overbearing on occasion, regarding Nellie with wariness and even suspicion. ‘Trust no one’ can sometimes be a good philosophy, but is it really universally applicable?

The play’s ending is rather sudden and somewhat inconclusive – part of me wonders if it should be classed as an ending at all. The rest of the narrative is interesting enough, and underneath Nellie’s folksy and bright exterior lies more than an element of frustration and despair. I rather liked the exploration of the dangers of putting one’s thoughts online (something which your reviewer is acutely aware, or at least he likes to think so). For those who, like me, knew next to nothing about gestational surrogacy before seeing this production, the play is a good introduction to the process – the biology as well as the uncertainty, the emotions as well as the ethics.

There can never be too many reminders that there are certain things in life that no amount of money can buy. This play’s characters are credibly realistic, and it was intriguing to observe the interactions between these two very different women, not only divided by a common language but by personal interests and outlook on life. A worthwhile experience.

Catherine, an Australian expat living in London, has everything – a husband and an international life. Everything except a child.
In a last desperate attempt to fulfil her dream of motherhood, she hires Nellie, a mother of two and first-time surrogate, living in the surrogacy state of Massachusetts in the USA. Together they embark on a journey that creates and changes lives.
e-baby is a story of love and betrayal, highlighting the hitherto hidden world of surrogacy, where new life can start with an online ad. How far would you go to have a child?
www.aequitastheatre.co.uk